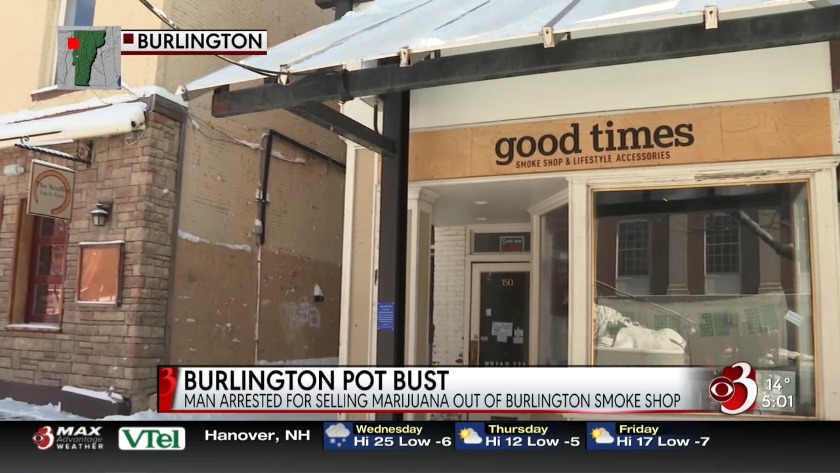 BURLINGTON, Vt. (WCAX) A Burlington business owner is accused of illegally selling pot out of his Church Street business.

Wednesday, the owner of Good Times, Derek Spilman, answered to a judge.

Spilman appeared in federal court in Burlington about 24 hours after his arrest on Church Street. His mother had a few expletive words for reporters and she actually swatted at a WCAX News camera.

According to court documents, Burlington Police have received complaints about the business since September of last year when a neighboring business owner complained they saw high school-aged kids leaving with marijuana. Another complaint in October was from a mother who said her juvenile daughter bought marijuana edibles from Good Times and was sick after her and a friend ate the whole bag.

Burlington Police and the DEA made the arrest Tuesday night and said they found a handgun, pills, cash and multiple grams of marijuana.

People from all over the world come to Church Street. And in Burlington's historic shopping district there sat a store allegedly selling marijuana and marijuana edibles to whoever texted the number on the door. And it allegedly happened right across from City Hall.

"We always knew that something sketchy was going on," said David Chapnick of Burlington.

"I think it's sketchy, shady to do that kind of thing," said David Mussner of Burlington.

It's almost like it was advertised: handwritten notes on the door, odd hours and a blacked out door at Good Times on Church Street.

It was a secret until complaints came into Burlington Police from neighboring businesses and a parent wondering how their minor-aged daughter bought marijuana edibles.

"If we're going to prioritize our work to protect Vermonters and follow the needs of our populous, marijuana enforcement is not going to be at the top and it hasn't been at the top of our priorities for a while now," Burlington Police Chief Brandon del Pozo said.

Del Pozo says the department is focused on battling the opioid crisis and getting fentanyl and heroin off the streets.

"Marijuana does not take precedence over heroin and fentanyl, crack and cocaine," del Pozo said.

"I myself didn't really believe it," Fair said.

Fair is an attorney with Vermont Cannabis Solutions. He does not represent Spilman but wonders what would happen if Vermont had a regulated market for marijuana.

"That is what we need-- a tax and regulated system so that people can have access both medicinal and adult use cannabis they can know the product they are getting, there's oversight, there's consumer protection in place," Fair said.