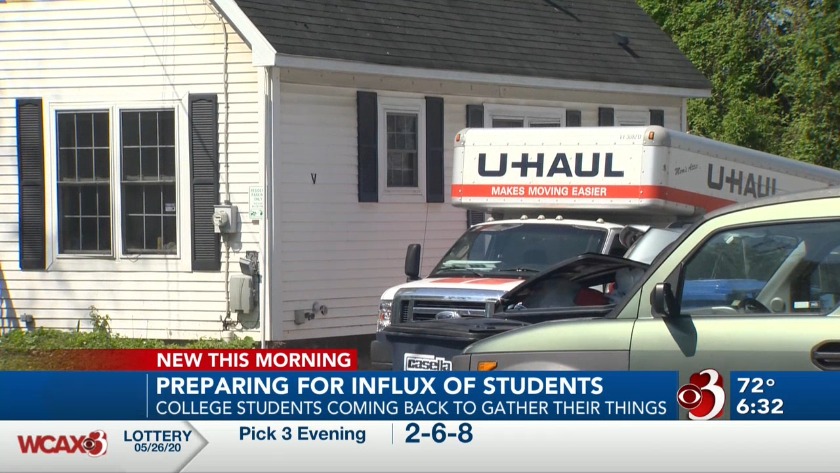 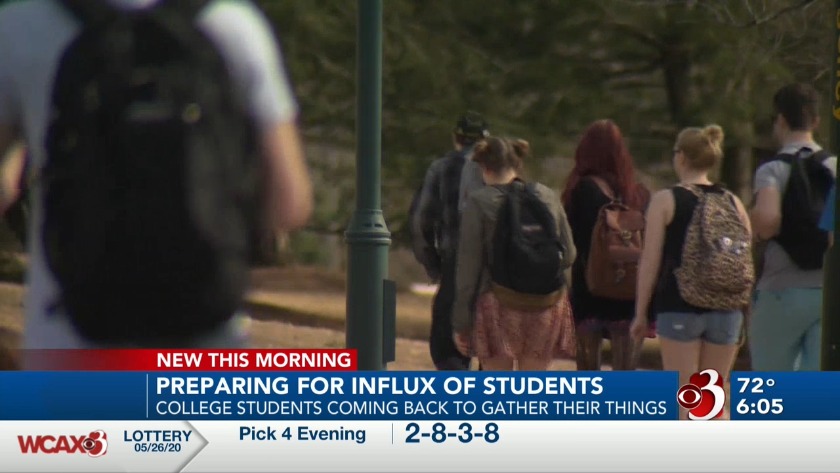 BURLINGTON, Vt. (WCAX) Burlington officials anticipate hundreds of college students will pour into the city later this week to pick up items and move into housing, and that has some residents worried about out-of-state students causing a coronavirus outbreak.

At the end of this week and the beginning of next, Burlington's streets will get a lot busier as college students and personnel return to campus to pack up the rest of their things while others move into area apartments.

Per Mayor Miro Weinberger's announcement last week, out-of-state UVM students are expected to participate in the "Box it in" plan by getting tested immediately at a pop-up site at the University of Vermont.

The program also entails tracing positive cases of COVID-19, asking returning students to voluntarily quarantine themselves for two weeks and encouraging open communication between the students, their families, the university administration and city officials.

"If you layer all those strategies together, the goal is to suppress the virus, identify it quickly and contain it if there are any students that bring it back," said Weinberger, D-Burlington.

Weinberger says while his preference is to educate rather than enforce these protocols, he says campus and city police will ramp up noise patrols in the area to limit large gatherings and ensure students follows state guidelines.

With the influx, landlords and property managers are doing their part to keep the city safe.

"This year, we focused very specifically on disinfectant, so beyond just detergents and soaps getting places visually clean, we want to make sure we're killing germs," said Jacob Hinsdale with Hinsdale Properties.

Usually, the firm cleans its own apartments, which are primarily located in Burlington's Old North End, but this year, they hired a maid service to properly disinfect every single unit.

"To make sure that every single corner, wall, door, cabinet is touched, disinfected and ready to go," said Hinsdale.

Ready to safely welcome a new group of tenants, Hinsdale began turnovers on May 18 to avoid people piling on top of each other. Similarly, this week and into next, they are staggering move-in times for about 40 units. That amounts to about 100 UVM and Champlain College students, some coming from out-of-state.

"My role is to gently remind people what the rules are -- and that goes from making sure people aren't climbing on roofs -- and this year it's adding that people should be staying indoors for the first two weeks that they come into the state," said Hinsdale.

"Whether they'll follow through is another thing," said Angela Zaikowski with the Vermont Landlords Association.

She says property managers don't have the tools or responsibility to enforce the two-week self-quarantine, though she encourages them to remind tenants it's an expectation.

"The biggest thing is just for people to remember this is not business as usual for anyone and to be patient. Things may take longer than they normally do. Protocols aren't going to look exactly the same," said Zaikowski.

She says the challenge is upholding all the COVID-19 mitigation standards to the move-ins, including that tenants and helpers wear masks and stay six feet apart at all times.

Champlain College leaders are still working out their own logistics.

"This is a new collaboration for an event that has not transpired like this quite like this before, so it has taken some real effort to figure out what is the right strategy to deal with this," said Weinberger.

Zaikowski says it's more important than ever current tenants completely clean out the apartments as soon as possible, taking every item inside with them as they go. She stresses landlords need this time to properly prepare for the next group moving in.