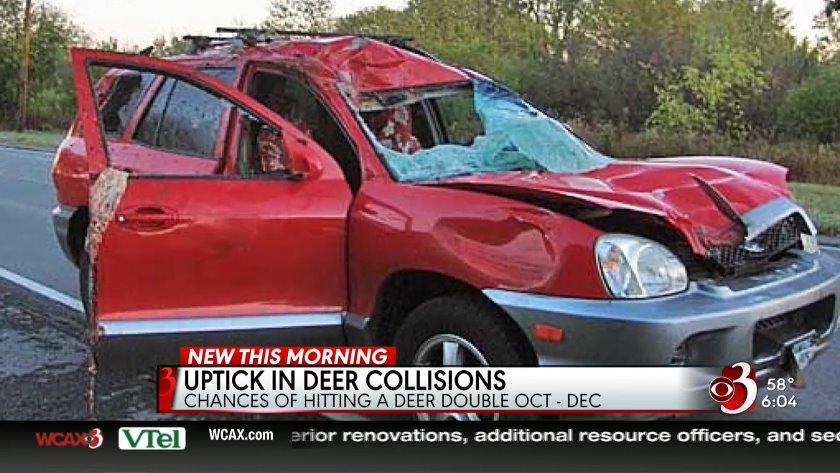 Chances of hitting a deer double during Fall months 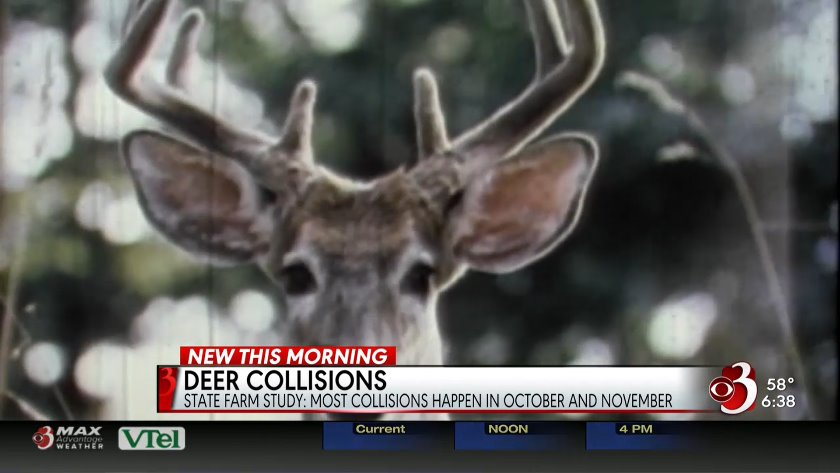 Chances of hitting a deer double during Fall months

BURLINGTON, Vt. (WCAX) There are plenty of dangers when it comes to driving, and over the next couple of months you can add deer to that list. A study by State Farm insurance says late October through December is when we see a sudden rise in deer getting hit by cars.

Vermont Fish and Wildlife officials say the best way to stay safe over these next few months is to pay attention, especially to road signs.

“I've never actually hit one -- it's a miracle. Pretty much everyone I know who lives in my area has,” said Chris Petersen, who has been driving for more than 15 years. He knows his chances of hitting a deer go up this time of year. “It's extremely common to see dead deer all along the road, it's pretty sad.”

Vermont Fish and Wildlife says there are about 150,000 deer in the state of Vermont. Of that number, about 3,000 are reported to be hit by a car. Officials suspect the actual number of deer hits is closer to 6,000 because not every collision gets reported.

In late October and early November they say the road kill numbers go up because deer are not paying attention.

“The testosterone level is rising in male deer and they have one thing on their mind and they actually stop eating a fair bit. And that's chasing doe to try to breed the female deer,” said Fish and Wildlife's Mark Scott. “The breeding cycle kicks in for deer and that's why we actually see more people hitting the deer on the highway.”

Fish and Wildlife agrees with State Farm's numbers that say more than half of the deer collisions in Vermont take place from October to December, bringing the chances of hitting a deer up to 1 in 173.

To decrease the chances of hitting a deer, officials say pay attention to road signs. “Those are there where we know a lot of deer get hit on the highway,” Scott said.

Petersen calls himself lucky but says he's always on the lookout and so should you. “Be looking for them all the time, especially around corn fields or any open fields,” he said.

Officials say if you see one deer hit the brakes because there could be another one. They also remind drivers not to swerve to miss a deer because you might end up in a ditch.

If you do hit and kill a deer, officials say it is important to report it to the police. After that, there are a few options: first, you can let Fish and Wildlife get rid of the animal. Second, if you want to eat the deer, you must contact the state game warden and have them give you permission to keep and eat it.

As a reminder, it's illegal in the state of Vermont to possess a deer unless it's been legally shot during an authorized hunting season.

“The wardens will try to get to it soon and get that to a church supper or a community event where they'll serve venison there. They have quite a long list of people who are interested on the highway,” Scott said.

Experts say game wardens can help guide you through that process on the phone or online.