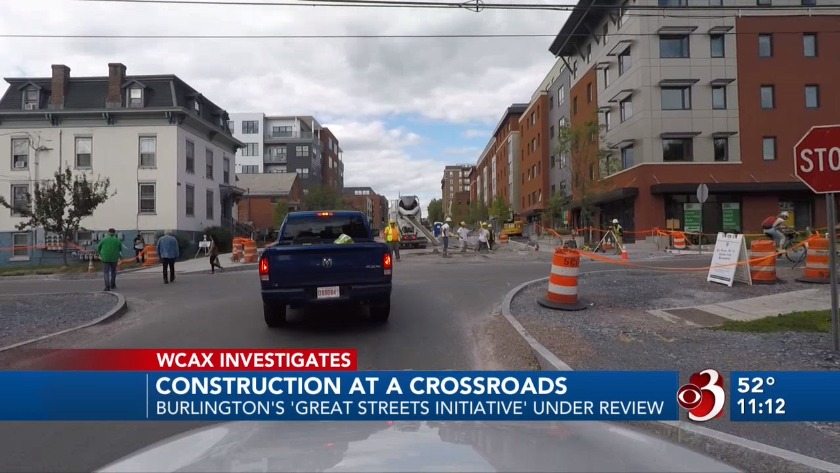 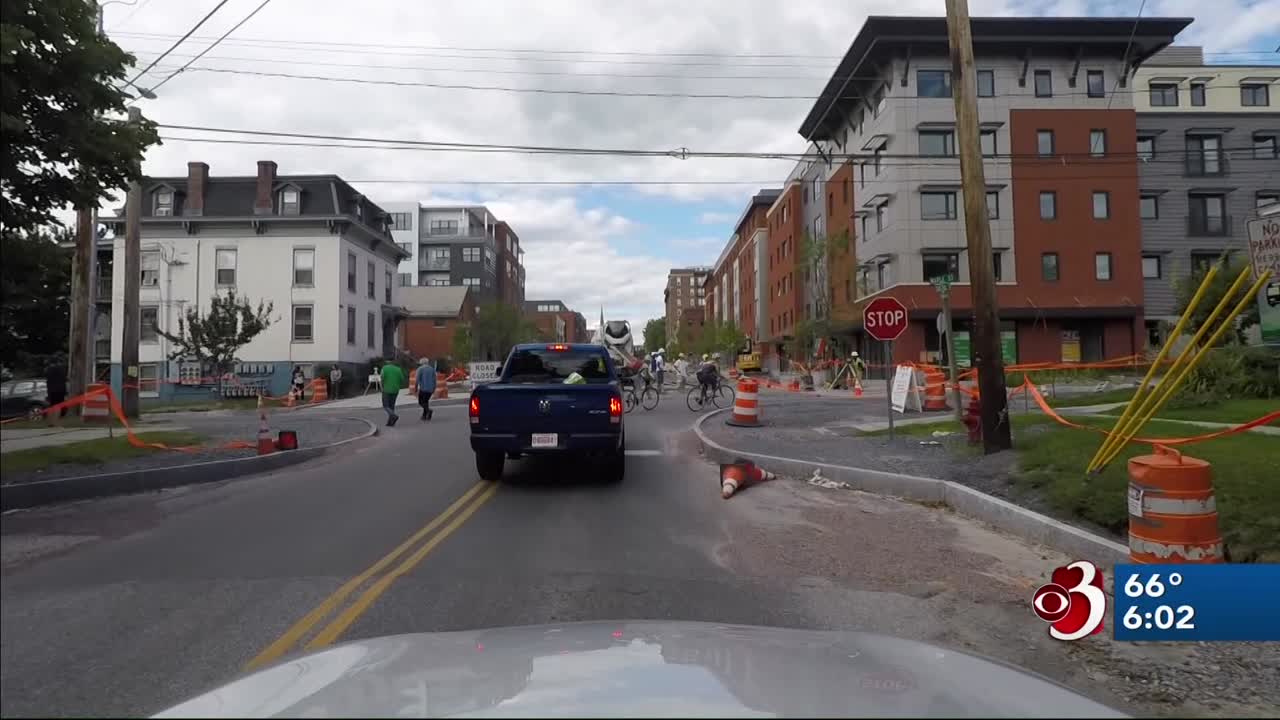 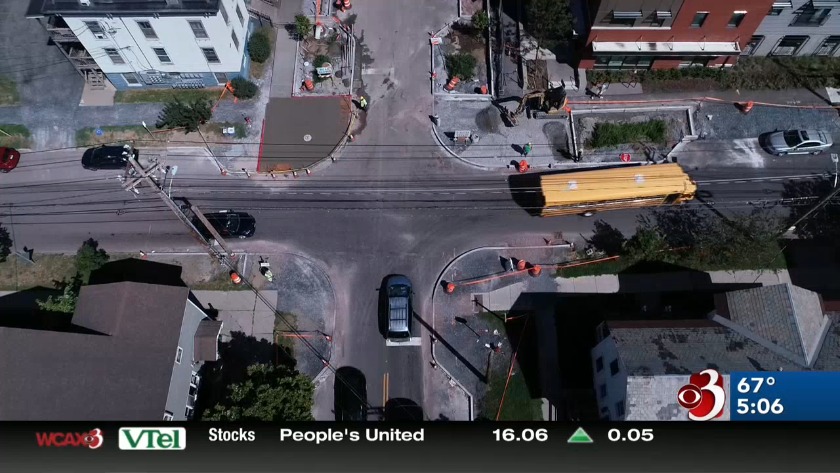 BURLINGTON, Vt. (WCAX) We are digging into a Burlington construction project many of you are talking about. It's the redesign of the intersection of St. Paul and Maple streets. Some of you have reached out to us saying it's hard to navigate and causing damage to your cars.

This isn't the first intersection the city has redesigned. There was a recent rebuild at Main and Champlain streets. But this latest project at Maple and St. Paul is causing drivers the most headaches.

Our Celine McArthur is investigating your concerns.

The four-way intersection has bump-outs to make room for pedestrians, trees, outdoor dining, even rain gardens to keep runoff out of Lake Champlain.

But the space for these added features had to come from somewhere– the road. The streets here are now narrower and-- for some drivers-- harder to navigate. They say the granite curbs are tearing up their wheels.

City leaders told WCAX News this is the new norm in Burlington and people have to get used to it. But do they really?

Construction is almost done at the intersection of Maple and St. Paul streets, and Mayor Miro Weinberger is clearly excited.

"I think in the months and years to come, people are going to think of this as one of the really great streets in Burlington," said Weinberger, D-Burlington.

Jacob Hinsale manages the apartment building on the corner and says these upgrades will make his units more appealing to prospective tenants.

"I think, quite literally, the curb appeal is going up because of granite curbs and I think people will be happier living here," Hinsale said. "We're definitely getting a huge upgrade for pedestrians."

That's because the bump-out design forces drivers to slow down.

"That edge friction is what you call that nervous feeling you get when you go around a bulb in a sidewalk. And that nervousness makes you a safer driver in the end, as irritating as it can be. It makes you calm down, look where you are, slow down and make sure there are no pedestrians in your way," Hinsale said.

But some drivers say the design is unnecessary.

"One of the things they said was we're trying to slow traffic down. How slower can you get when it's a four-way stop?" driver Steve Ciardelli asked. "They're just basically telling motorists to stay home and leave your cars at home, don't go to Burlington."

Ciardelli says the turns are too tight, especially for trucks, buses, trailers or emergency vehicles.

"If a person is coming down Shelburne Road with a boat to try to get to the boat ramp, make a left-hand turn, he actually has to go into the other lane and there's no way he can do it without causing a problem," Ciardelli said.

We sent up the SkyMax 3 drone to give you a clearer picture of what Ciardelli is talking about. We captured video of a bus that couldn't turn without going into the opposite lane of traffic.

Dennis Ailore lives right up the road and says the design aimed at protecting pedestrians is putting them in greater danger because drivers are focused on making the turn without crashing their cars.

"By the time they look at everybody else and they're bouncing off the curb, they don't have time to look for people," Ciardelli said.

Mike Burnett works at Gastrogrub on the southwest corner of the intersection. He says he lost count of how many cars nailed the curb.

"I see it pretty much every day," Burnett said. "Sometimes cars pull up at the same time, someone has to back up--especially if that's a bus and they keep running over curbs because they're sticking out in the middle of the road... Normally, if you hit a curb, you hit your tire. All I see is people destroying their rims and those are expensive."

Burnett is worried people will avoid the area and find new places to dine.

Ericka Redic is active in her Neighborhood Planning Assembly and is challenging city leaders about the intersection.

"It's just stupid. You can't have done that, stepped back, seen people hit things and thought, 'Wow, this is really a good idea,'" Redic said.

Three weeks ago, we met with City Engineer Norman Baldwin to discuss driver concerns. He defended the design, saying this type of development in Burlington is the new norm.

"They need to enter the intersection with a higher measure of caution than they're used to and settle into how it's designed," Baldwin said. "We are committed to the concept that pedestrians are the primary interest to be served here."

Mayor Weinberger agrees with his city engineer-- pedestrian safety was a driving factor in the design. But he couldn't tell us if the intersection was dangerous.

We asked Burlington police for statistics. They tell us there have been no pedestrian-involved accidents there in at least the last three years.

And sometime in the last three weeks-- since we interviewed the city engineer-- the city decided to review the plan.

"There's concern that there might be something not quite right about it, there may be a need for an adjustment with it," Weinberger said.

Because of the possible adjustment, the mayor says they've stopped pouring concrete for the bump-outs.

If you want to take part in the discussion, mark your calendar for Sept. 17. It will be addressed at the next City Council meeting for the Transportation, Energy and Utilities Commission sometime between 5-7:30 p.m. The address is 645 Pine Street in Burlington.

Celine asked the mayor how much a rip and redesign would cost for the intersection and, at this point, he says he doesn't know.

We will be at the meeting to get you some answers.

In the meantime, we want your feedback on the project. Email us at news@wcax.com or message Celine McArthur on Facebook or Twitter.

While many people have told WCAX News the design is a nightmare if you're in a big car, have a trailer, or are driving a bus or fire truck, the city engineer says the fire department was consulted on the design.

"All of this design was vetted through the fire department. We feel we're on solid ground that they can properly respond to whatever emergency calls they may have with the appropriate equipment," Baldwin said.

"We've had a few people contact us, as well, so the way it works for us is when we have projects like this, we provide the engineers with specific turning radius and the needs of the fire department. So, in turn, they provide that to the contractors and the expectation is that's how it's going to turn out and will work that way," Burlington Deputy Fire Chief Peter Brown said.

That's the expectation but is it a reality?

The fire department told our Celine McArthur they have not driven through the intersection with the ladder truck.

For now, the fire department says you don't need to worry about them not reaching you in a time of need.

Some drivers worry this intersection could become an even bigger problem come December if nothing is done now.

They're concerned that if they can't easily navigate the intersection now, snow will make it even worse.

Last year, we got 103.6 inches of snow in Burlington and that makes for huge snowbanks.

"Once winter comes and we have to plow through there, it's going to be one lane! From any one of those intersections to get through because the bump-outs are so big," Ericka Redic said. "So then what happens?"

"When you do these bump-outs there are some trade-offs and it does become... it adds a little challenge to the clearance of snow in the winter," Mayor Weinberger said.

"We've had conversations with our right-of-way team. Obviously, it's going to be a little bit more of a challenge than in the past, but we are committed to the concept that pedestrians are the primary interest to be served here," City Engineer Norman Baldwin said.