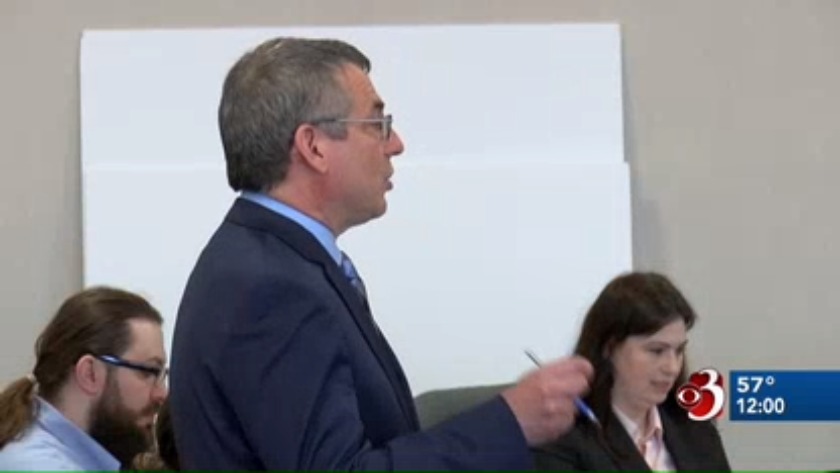 But before the doctor even took the stand, Bourgoin's lawyers tried to bring the trial to an abrupt halt.

This expert testimony is the heart of the defense case because the trial centers around not whether Bourgoin caused the crash, but whether he was able to understand what he was doing at the time. His mental state will be the most fought-after fact in this trial. Monday, the jury heard from one of two people who the defense is relying on big time to make their case.

"He was suffering from psychosis," said Dr. David Rosmarin, a forensic psychiatrist.

Rosmarin says that's what was happening to Bourgoin the night of Oct. 8, 2016. Saying Bourgoin was suffering from bipolar disorder with psychosis and couldn't appreciate the criminality of his actions that night, when he admittedly drove the wrong way on Interstate 89 and collided with a car full of teenagers, killing all five of them.

"He may have had ADHD," Rosmarin said.

Rosmarin described Bourgoin's troubled past to the jury, including bouts of major depression after the deaths of close friends.

"It's extremely serious," Rosmarin said. "He had morbid thoughts of death."

But he said Bourgoin never tried to hurt himself.

The doctor also described Bourgoin's episodes of elevated energy levels, known as hypomania, during the early part of his relationship with his ex-fiancee.

"People who have hypomania don't tend to complain about it," Rosmarin testified. "A lot of people like their hypomania. Except most people end up paying the piper."

And the psychiatrist testified that he did not believe Bourgoin's threat to drive his ex and their child into a pond in the spring before the crash was real.

"I don't think it was an actual threat. He was using it rhetorically," Rosmarin said. "She takes off with the baby and goes to police."

Rosmarin testified he believes that led to a stressful and depressing situation for Bourgoin.

"Now, his mood is switching," Rosmarin said. "He's getting down these paranoid places on the internet... He starts to have this grandiose idea that things are starting to catch his eye because it's him."

Rosmarin says Bourgoin told him it got worse, describing Bourgoin not sleeping, thinking car radios were communicating with him and convinced the government was recruiting him on a secret mission.

"The mood disorder is driving his psychosis," Rosmarin said.

The doctor went on to describe in great detail Bourgoin's mental state the night of the crash. The doctor is not done on the stand yet. In fact, we aren't even through the defense's questions. So Tuesday, we expect to hear the rest of those, plus cross-examination from the state where they try to poke holes in his argument that Bourgoin was insane.

Several times Monday afternoon the defense psychiatrist mentioned that Bourgoin had used marijuana through his life to "self-medicate" his mood swings and disorder. But Rosmarin says in the days leading up to the crash, Bourgoin had stopped using marijuana. Levels of THC were found in Bourgoin's toxicology report after the crash.

Now, before Monday's testimony, the defense asked for a mistrial. They claimed there was evidence the state did not share with them regarding testimony by Bourgoin's ex-fiancee on Friday.

The judge said the defense could have found out if they had bothered to depose the witness before trial. He ultimately ruled there was no mistrial but both sides agreed to strike that portion of the testimony from the record.