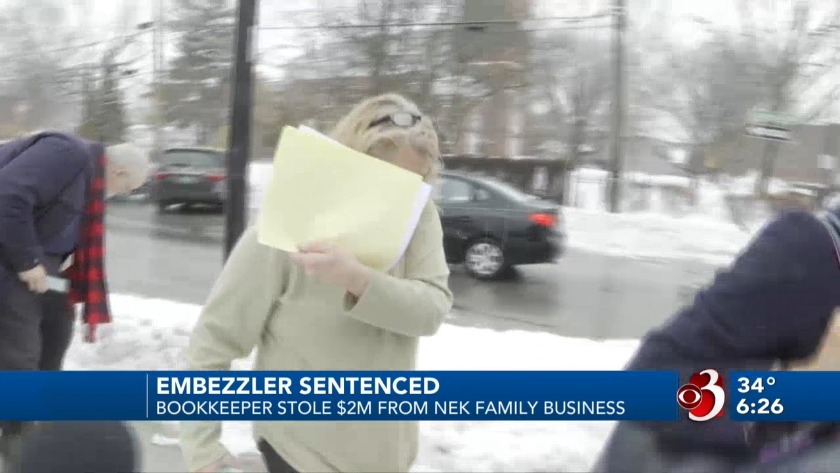 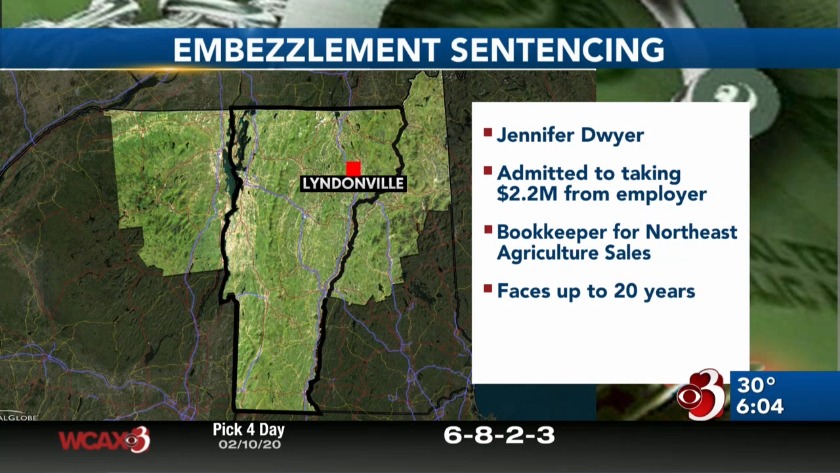 Woman involved in $2M embezzlement to be sentenced

BURLINGTON, Vt. (WCAX) A St. Johnsbury woman who admitted to stealing more than $2.2 million from her employer has been sentenced to just over four years in prison.

Jennifer Dwyer hides her face walking out of federal court on Tuesday.

"Ms. Dwyer got what she deserves," said Jim Choinere, the owner of Northeast Agriculture Sales in Lyndonville, where Dwyer worked as a bookeeper, embezzling over $2.2 million over 10 year.

Choinere says even though family members questioned Dwyer's lifestyle, he trusted her. "Our business is having kind of a tough time over this, but we will persevere," he said.

Choinere says they have had to take out a number of loans amounting to hundreds of thousands of dollars to keep the business open. The 74-year-old says he has had to put his retirement on hold because of Dwyer's actions.

Federal prosecutors say between 2007 and 2017 Dwyer transferred company money to her own account, disguising them as business expenses. In August 2014 alone, she stole over $24,000-

"I dont have anything to add besides what I said in court," said Natasha Sen, Dwyer's lawyer. In court, she said Dwyer spent the money primarily on online gambling. But federal prosecutors say she also bought a pickup truck, a camper, and paid personal debts.

She apologized to the family in court, saying she was on a "vicious cycle" and wanted to confess, but was so overwhelmed and that the only was she could stop was to get caught.

Much of her assets have been liquidated, amounting to just under $85,000 for the business, less than 4% of what she stole.

Dwyer is set to be sent to federal prison next month and must pay 10% of her gross monthly income to help cover restitution. Part of the plea agreement is that she pay back the $2.2 million, but prosecutors say it is unlikely the family will get it all back.