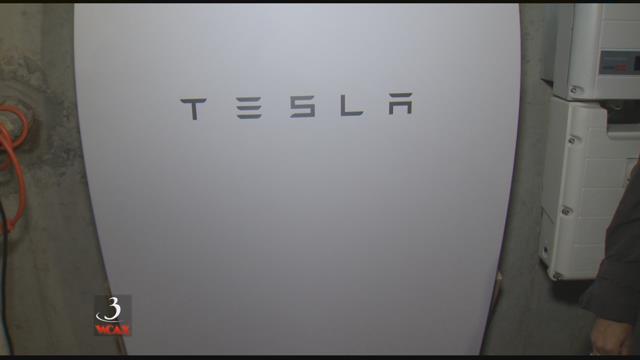 MILTON, Vt. (WCAX) While other power companies were telling customers to reduce how much energy they used during the recent heat wave, Green Mountain Power was focused on a different tactic.

For years, GMP has worked on creating a system of stored energy to rely on during peak energy days, and GMP Vice President Josh Castonguay says it worked like planned.

Castonguay says to save money in Vermont, power was pulled from 500 Tesla Powerwalls, as well as energy storage facilities in Rutland and Panton.

Think of it like a game. GMP waits until the moment of peak usage and then sends out all their stored energy to the grid. That reduces the need for dirty and expensive backup generators to be brought online.

Tesla Powerwall owner Mike Wheeler says he watches an app on his phone to see how much energy is stored inside his Powerwall. The Powerwall is basically a big battery that holds the energy generated by Wheeler's solar panels.

During the heat wave, Green Mountain Power was using almost all of the battery's reserves. When he checked his phone, he says the Powerwall was about 80 percent drained.

"I assumed at the time that GMP was actually harvesting the energy from our Powerwall for our air conditioning needs of the grid," said Wheeler.

While Wheeler is watching his app, GMP crews are watching the ISO-New England system for a predicted peak, or when people are using a lot of energy. This year's biggest day of usage so far was July 5.

"When New England hits that peak, every state has to share in the cost of the bulk system. So everything, each state, each utility, can do to lower the peak during that time is what saves that money," said Castonguay.

He says customers will soon see the cost-savings from using the batteries.

So far, 500 Tesla Powerwalls are installed around Vermont with 1,500 more expected to go out. Castonguay says they'll be ready if another big peak pops up this summer.

"We're installing more Powerwalls every day, so we'll have more to use if something else comes up this summer," he said.

The Telsa Powerwalls also serve as a backup generator for when a homeowner loses power. People in Vermont's program pay $15 a month for 120 months, or a one-time cost of $1,500 per Powerwall.

Normally, it costs about $8,000 to order one from Tesla's website.