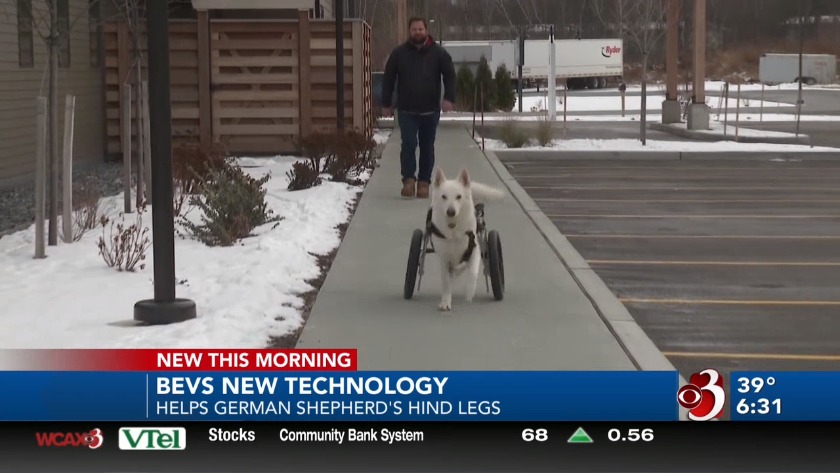 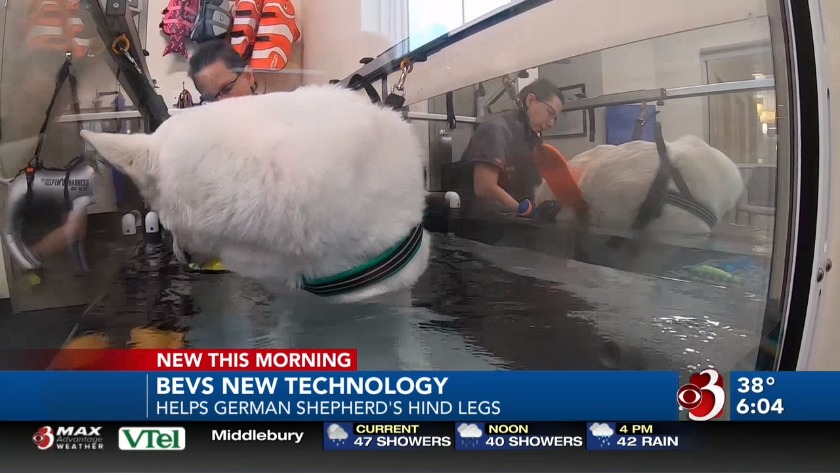 German Shepherd back on his feet thanks to new technology

WILLISTON, Vt. (WCAX) The new Burlington Emergency & Veterinary Specialists or BEVs facility in Williston provides the kind of care animals can't get anywhere else in the state and now we're seeing that in action with 7-year-old "Huckleberry."

The German shepherd was diagnosed with a terminal illness about a year ago, but thanks to state-of-the-art equipment and services, the disease hasn't taken away his zest for life.

"Huckleberry is just such a playful guy. He really, as you can hear the squeaking toys in the background, he's got a lot of love to give and he loves everybody he meets," said George Martin, Huckleberry's owner.

Martin and his partner, Paige, fell in love with Huckleberry seven years ago, when they adopted him in Burke.

"We don't have any kids, so this is our kid," said Martin.

But Martin and Huckleberry's dog camp counselor saw the pup who was usually first in line for fun, fall behind.

"About a year ago, we noticed a little weakness in his hind legs," said Martin.

"Slowly we noticed that he was like a little more sloppy with his back leg movement," said Chelsea Tillinghast with Buddy's Buddies.

Hoping it was just arthritis, Martin took Huckleberry to BEVs, where he learned the disease was far more serious. Huckleberry was diagnosed with degenerative myelopathy, a terminal illness similar to Lou Gehrig's disease in humans that ultimately causes paralysis.

"We actually had to put down our other dog like a month before we found out this diagnosis, so there was a lot of emotions around the house anyway," said Martin.

Over time, veterinarians say Huckleberry's weakness will get worse, but in the meantime, he isn't in pain. Every week, the veterinarians at BEVs keep him moving using a water treadmill. And with the custom-fit mobility cart, he can leap and bound like he always has, even if he needs a lending paw every once in a while.

"The PT and the wheels have allowed him to live a happy life, which is really all we want," said Martin.

"It's a gift that we can cherish him and really spoil him, which I think is everyone's intention with their dog, but it's a more focused intention because we know a little bit more of a timeline," said Tillinghast.

Veterinarians at BEVs say Huckleberry is the perfect example of an animal who can thrive with a disability.