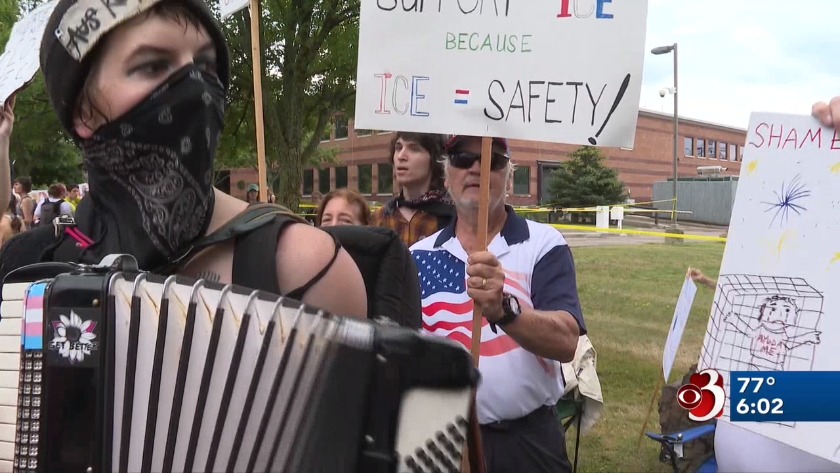 They also are demanding the end of collaboration between Vermont's law enforcement and deportation officials.

Protest organizers say 750 people marched from Vermont Technical College to the Law Enforcement Support Center a couple of miles away.

"They're doing what we wish that the people of Germany and of Austria and of Poland would have done for us. And so we're speaking for the immigrants because it's our responsibility," said Bob Fishel of Burlington.

Jewish community members like Fishel compared ICE raids to the beginnings of the Holocaust.

"We won't allow another group to be dehumanized and rounded up by a federal police force," he said.

"We're not going to tolerate it," said Faried Munarsyah of Burlington, one of many who say they feel a personal connection to the cause. "I'm a first-generation immigrant, and I think everybody here are either immigrants or decedents of immigrants themselves. It's just not right that we are treating these people like we wouldn't want our families treated."

As protesters marched up to the Law Enforcement Center, they were met with three counter-protesters, arguing ICE protects our country's economy.

"They're taking away jobs. They keep the wages and the salaries down," said Theresa Virginio of Lincoln. "If they have true asylum claims, we are for that. We are for legal immigration, for people coming in and applying and doing it the right way."

"This is not intended to be just show up and go home and it's done, this is about getting people out to build a movement," said Siegel.

Those arrested are scheduled to appear in Chittenden Superior Court on Aug. 13.