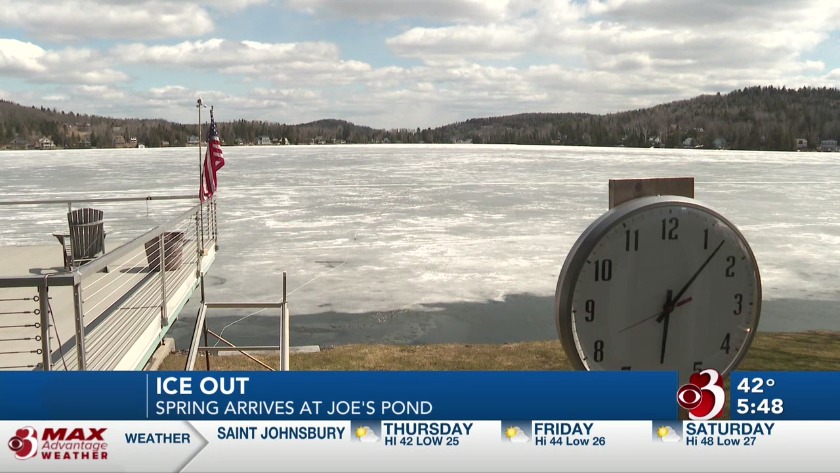 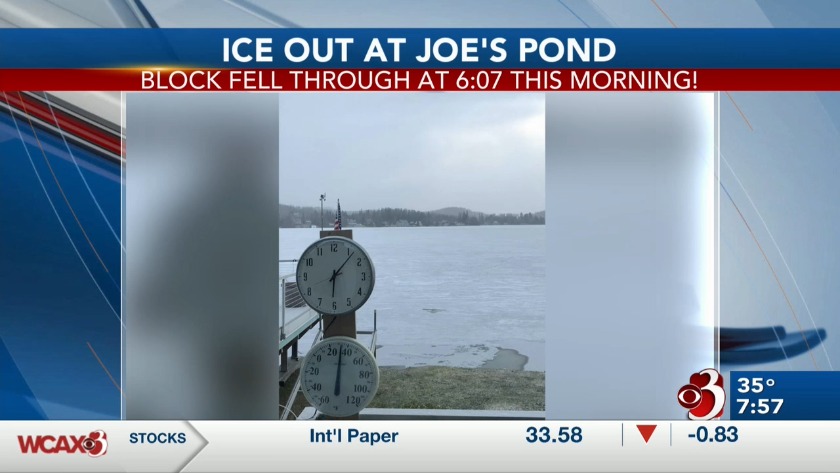 Ice officially out on Joe's Pond

WEST DANVILLE, Vt. (WCAX) There are some traditions that not even a worldwide pandemic can stop. That includes one in West Danville that's more than three decades in the making.

As waves lap against the shore at one end of Joe's Pond, a clock at the other stands frozen in time.

"It started with a bunch of guys over on West Shore Road and they were having a bet between each other when the ice would go out," said Larry Rossi of the Joe's Pond Association.

From that, that annual fundraiser was born. But now, 33 years later, anyone can guess when a brick will fall through the middle of the ice, pulling a cord to stop the clock. This year that happened Wednesday, April 15, just after 6 a.m.

"There's only been, I think, three other years when it has been earlier than this," Rossi noted.

"Very exciting, it's the first sign of spring," said Jenny Rafuse of the Hastings Store.

Tickets for the 50/50 raffle are sold at the Hastings Store. But some competitors mail in their $1 bets from across the globe.

"I think it really brings people together, not just in the community but all over the world," Rafuse said.

The ice-out seems even more fitting in a world that faces a common enemy. But some things, like the passage of time, will never stop.

"And this is one of them. We are going to keep on going," Rafuse said.

Milne has lived year-round on Joe's Pond for the last 26 years.

Luckily, she'll have another shot. The Joe's Pond Association is still figuring out who won this year; 10,000 tickets were sold.

"We aren't going to stop this," Rossi said.

Part of the money raised will go toward an annual fireworks display this Fourth of July, another event that organizers say will go on.