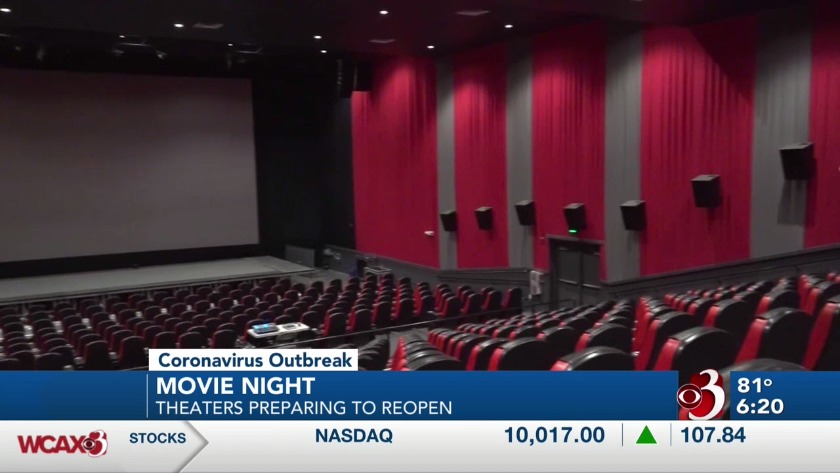 "It's cool. It's different from actually just watching it from inside," said 15-year-old Lana Vickery. "It's a great atmosphere," her brother Gabriel, 13, added.

Families like the Vickerys are eager to get back inside movie theaters for the immersive experience, and local locations are announcing the wait is almost over.

"Most of us have experienced the cinema as being something very special to our families or in our community as something we can share," Essex Cinemas General Manager Eric Reynolds said.

Reynolds says while the theater hasn't set a definite reopening date, it will certainly be sometime in late July.

"Mostly because there's some high profile movies coming out in late July like 'Mulan' from Disney and Christopher Nolan's 'Tenant,'" he said.

The company is working on a way to institute assigned seating. They've made a virtual map of each theater through which customers can choose their socially distanced spot. Staff, who train on safety protocols once rehired, will sanitize regularly and ask patrons to wear masks as much as possible per CDC and state recommendations. The theater is also spreading out showings to allow extra time for cleaning between each group.

"It's a big learning curve, and we're just getting started," Reynolds said.

Gov. Phil Scott's guidelines permit indoor businesses to reopen at 50% capacity, but he caps the number of people at 75. For theaters like the T-Rex at Essex Cinemas that can fit 400, that leads to a lot of empty seats and a ton of lost revenue.

Essex Cinemas Owner Peter Edelmann estimates they've missed out on $750,000 to $900,000 since March. And he says even if patrons pour in, he doubts the theater will fully recover anytime soon.

"Although we may get the revenue, the expenses are going to most likely match or exceed the revenues. But, we'll take that risk and get started," Edelmann said.

He says because so many companies delayed movie releases amid the outbreak, Essex Cinemas will play a combination of new products and older classics.

"My best resource is to go to my daughter and my kids and go, 'What would you like to see?'" he said.

He hopes his kids' expertise will encourage others to see movies the way they're intended to be viewed with proper precautions.

"Our mom has a special disease that if any of us got it, it would be a very bad thing, so I think it's good to have a perspective and see that it's not all fun and games," Vickery said.

For those who don't feel comfortable in a confined space, Essex Cinemas is building a drive-in situated right outside the theater. It will display movies and concerts and live stream events on a 40-foot screen at the Essex Experience green, while simultaneously airing them inside the theater. Viewers can listen to the sound on the grounds or tune into an FM radio signal. Per the governor's guidelines, only 150 people are allowed to gather on the green at a time, but others can watch from nearby restaurants.

"Navigating the waters, trying to figure out how to get through this with whatever help we can get, but also in a fashion that makes business sense," Edelmann said.

WCAX reached out to other local cinemas about their safety protocols but we had not yet heard back when this story was published.