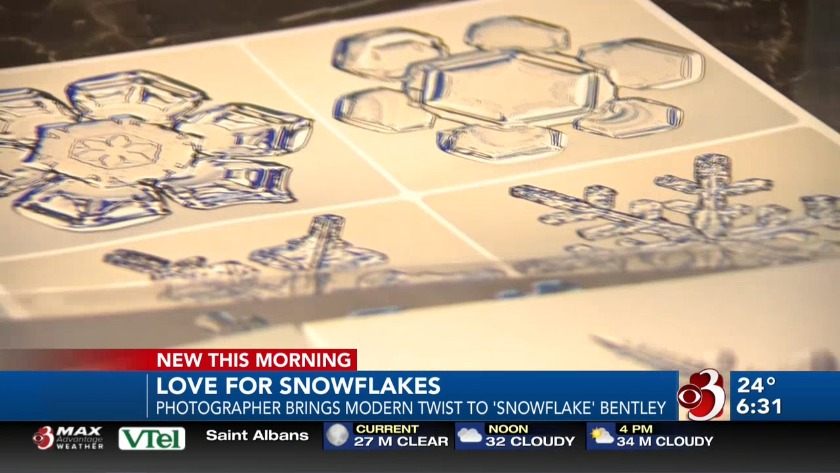 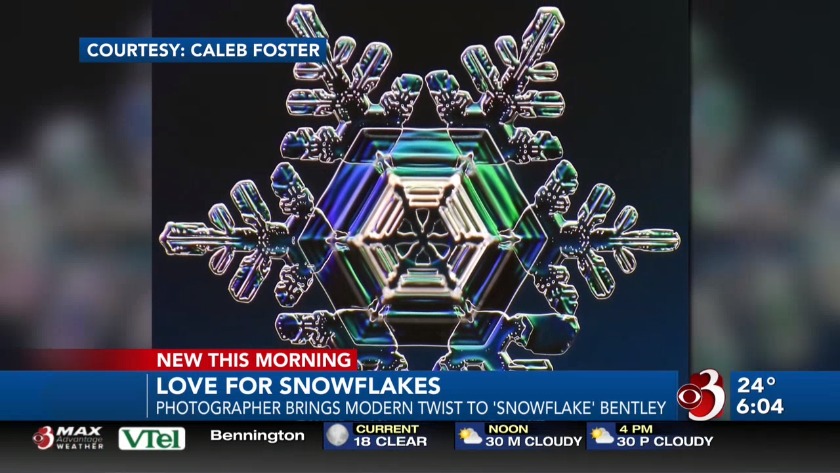 JERICHO, Vt. (WCAX) An exhibit underway at the Old Red Mill in Jericho is dedicated to Wilson "Snowflake" Bentley, the Vermonter renowned for perfecting the art of photographing snowflakes more than a century ago.

Now, there's another Jericho man gaining recognition for doing the same photography with a modern twist.

Every winter, Caleb Foster spends hundred hours standing on his porch, usually when it's below freezing.

"I wonder what my neighbors think when they drive by and see me out there. A couple years ago they came in the summer and were like, 'Man, you love grilling out," said Foster.

But rather than a grill and spatula, Foster's outdoor hobby requires a microscope and a paint brush.

"I love photography. I'm in the sciences, I've done microscopy with my day job. And so I just started staring at snowflakes on the back porch one day and grabbed my camera and tried to catch them on a black paper at the time," said Foster.

From there, Foster says the hobby snowballed into a full-blown fascination. "The interest is really that every one of them is absolutely unique and different," he said.

"The first snowflake of the season just gets me going. It's like the gas in my gas tank for that whole season," said Foster.

Foster has been looking forward to that moment every winter for the last 10 years. He started microscopic photography in Pittsburgh, then moved to Jericho in 2012. Little did he know, he'd set up shop in the same Vermont town as "Snowflake" Bentley did 130 years ago.

"It never has stopped being just kind of an incredible piece of irony to me that I've moved so close to where the pioneer of that," said Foster.

And Foster recognizes he has a few technological advantages. But they both faced one obstacle -- the fleeting nature of snowflakes.

But Foster says he has developed a technique to tackle the problem. He drew from his scientific background to stop a snowflake in time. He uses a chemical substance to petrify the crystals so they never melt.

"That really for me was a huge turning point because then I could go spend time in my basement and just set things up, buy lighting, you know try, all these different things and I had all the time in the world," said Foster.

Unfortunately, 'Snowflake' Bentley didn't have the same technology, but he still photographed about 5,000 snowflakes in his lifetime. So far, Foster has 3,000 pictures to his name.

Foster entered his microscopic images of snowflakes into Nikon's Small World Competition, one winning 5th place out of thousands of submissions.

The contest is considered the leading forum for showcasing the beauty and complexity of life as seen through a microscope.

Foster's images are being showcased internationally.