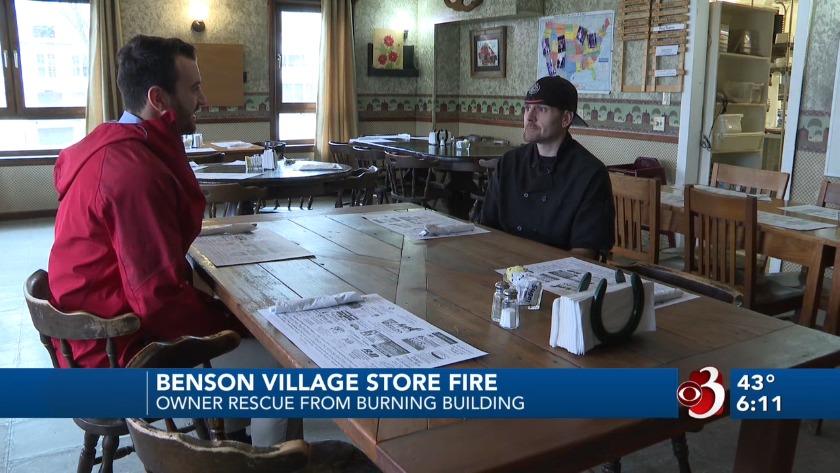 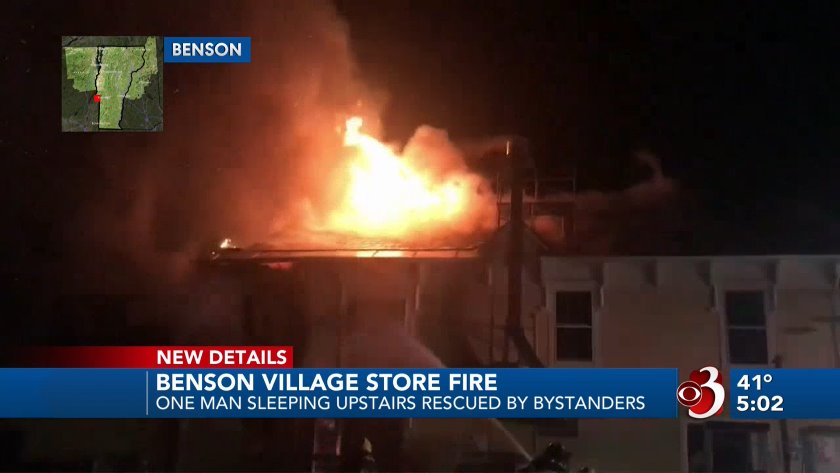 BENSON, Vt. (WCAX) The future of the burned out Benson Village Store remains uncertain, but the owner is alive and well thanks to his neighbors. Our Ike Bendavid spoke with the man who led the effort to rescue the store owner from the burning building.

A chef at the Wheel Inn restaurant in Benson, Matt Supernault was finishing his shift on Monday. That's when he was alerted to a fire next door.

"I just sat down to count tickets at the end of the night. That's when a guy came in and said the store is on fire," Supernault said.

Supernault jumped into action. He ran across the street to see the historic Benson Village Store in flames.

"The whole backside was already engulfed," he said.

Supernault was joined by other community members, trying to make sure no one was stuck inside. That's when he heard a voice. It was the owner of the store, Jim Tillman, who was trapped upstairs.

"He was just trying to get out," Supernault said.

Supernault and other bystanders put a ladder on a pickup truck, broke the second-story window out and helped the store owner to safety.

"Get him out of there-- was hoping someone else would do the same thing for me," Supernault said.

Officials say the fire started in the basement and worked its way up the building, leaving extensive damage. The exact cause of the fire is still not clear.

Now, the boarded-up building has community members looking for other options. Just a few days ago, the general store offered more than just a quick sandwich. The building was also the post office, gas station and a place to get your hunting license. Community members call it a vital part of the small town.

"It was handy, put it that way," said Bernard Gregory of Benson.

And without that local access in this part of rural Vermont, it means more time traveling to get those everyday things which used to be just next door.

Back in the restaurant, it's another day on the job for Supernault, who rejects the title of hero.