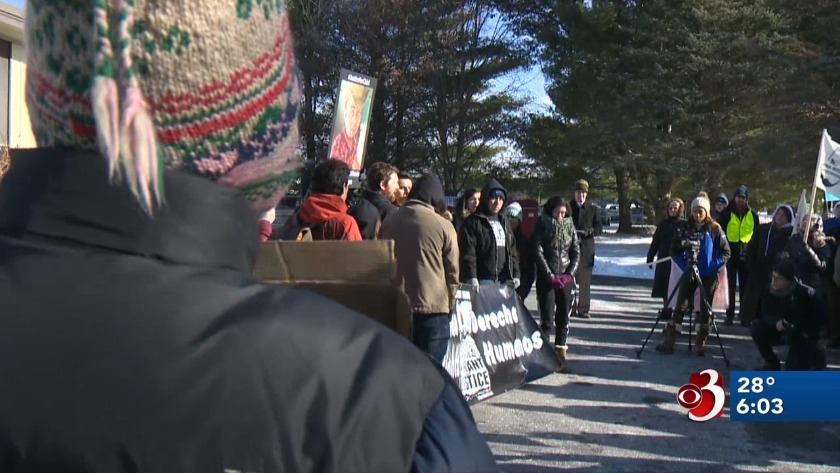 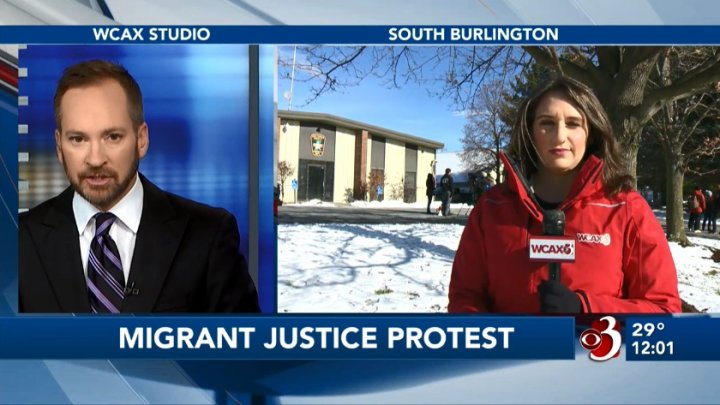 The dispute stems from a traffic stop last month in which a farmworker from Franklin County was detained.

Tuesday, advocates demanded the department that made the stop investigate whether they broke their own rules.

Dozens of Migrant Justice supporters gathered outside the Chittenden County Sheriff's Office in South Burlington. They protested after a member of the migrant farmworker community was detained by the Border Patrol after a traffic stop on Nov. 22. A sheriff's deputy pulled over Juan Ulloa for going 80 mph in a 55 mph zone on Interstate 89. Through a translator, Ulloa told the crowd Deputy Sheriff Jeffery Turner asked him for ID and when he didn't have any, asked the passengers in the car, including his cousin Luis.

"[I] don't think he had any reason to do that because it was me who was driving. I was the one who was responsible," Juan Ulloa said.

The Sheriff's Department declined on-camera interviews. But Sheriff Kevin McLaughlin said in a statement the deputy only did that because he wanted to find out if someone else in the car could drive it instead. And after that, Turner said he had reasonable suspicion that some of the occupants of the car had violated federal law. So he called the Border Patrol.

Luis Ulloa, 21, was detained. Migrant Justice representative Enrique Balcazar told us that the Fair and Impartial Policing Policy should have prevented that from happening.

"Under the policy, those things aren't allowed. They can't detain you for additional time just to let federal immigration officers come and detain you," Balcazar said.

McLaughlin disagrees, and said "his decision to involve federal authorities is consistent with the provisions of that policy."

We asked Vermont Attorney General T.J. Donovan what the policy does and doesn't say.

"The facts seem to be in dispute," said Donovan, D-Vt. Attorney General.

Donovan said he wants to see the investigation play out, but did note there is nothing that prohibits police from disclosing information to the feds. However, he said there is one "bright-line" rule and that's that police don't get to ask about a person's legal status.

"Can somebody say, 'Can anybody else drive here?' Of course you can say that. Can you ask where they're from and get into immigration and citizenship? No, you can't," Donovan said.

Migrant Justice says they want to see an investigation into whether the department acted correctly.

"But the Chittenden County Sheriff's Department has destroyed his life. They have cut his dreams short," Balcazar said.

Luis Ulloa is being held at the ICE detention facility in Dover, New Hampshire. Migrant Justice says it's a complicated case, so they're not sure what's going to happen to him next.

On their end, the Chittenden County sheriff told us the investigation is ongoing.

The case could ultimately go to the Vermont Criminal Justice Training Council for review. If there's found to be a violation, the deputy could face discipline.