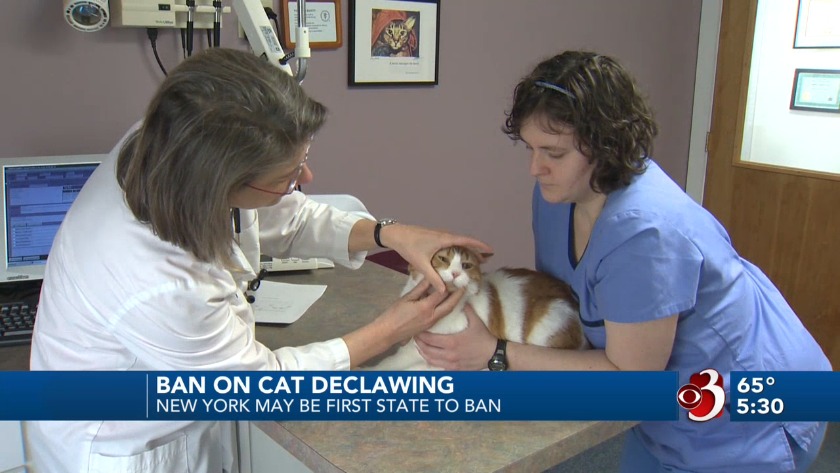 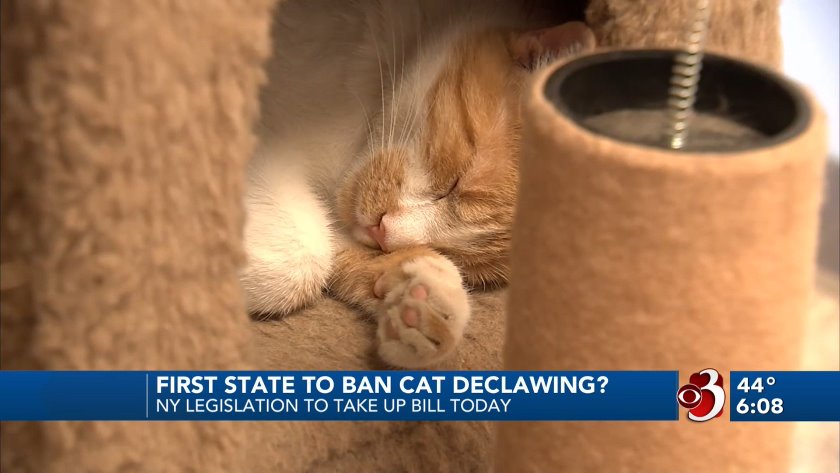 PLATTSBURGH, N.Y. (WCAX) New York lawmakers in the Senate and Assembly Tuesday passed a bill that would make the state the first in the U.S. to ban cat declawing operations.

Governor Cuomo has not indicated whether or not he supports the bill. Our Kelly O'Brien spoke with opponents and supporters and found out if it becomes law, declawing your cat could come with a hefty fine.

"Basically the equivalent to cutting off your first knuckle," said Lillian Cassidy with Animal Welfare and Rescue Services in Plattsburgh.

Cat declawing is a removal of the cats claws, cutting from toe to knuckle Veterinarians say if done right, the cat will feel little to no pain.

"Pain is controlled with medications post-operatively and if done at the appropriate age then this is a procedure that most cats do very, very well with," said Dr. Eric Eaglefeather with Eagle's Nest Veterinary Hospital.

He says it's done so a cat can live inside a home with its owner and usually it's prompted by a issues including a cat's aggressive behavior, the health and well being of the owner, or a landlord requiring the declawing as part of the lease.

"There is no veterinarian out there that I know of that just does this willy nilly, they take this procedure very seriously," Eaglefeather said.

But Cassidy says cutting their toe nails on a regular basis is just as effective. "You start to see you can prevent the damage, prevent the scratching by just cutting," she said.

This isn't the first time the bill has been proposed but it is the furthest it's gotten in New York.

"Yes, I'd like to see it happen. I think it would be good for the cats as, I said, declawing doesn't really do anything medically to improve their life," Cassidy said.

But vets across the state are opposed to the idea. "I find it ironic that the people who know the most about this subject are the ones who are being dismissed the most," Eaglefeather said.

There are exceptions, like if there is a medical reason the cat would need this due to an injury or an infection.

But both sides fear that if passed, if will ultimately lead to more strays on the streets.

"The end result is that we're going to end up seeing more cats being thrown out of the house, more cats being abandoned and more pets with behavioral issues being asked to be euthanized," Eaglefeather said.

This would not apply to any cat that has already had the procedure. If a vet were caught declawing cats they would be fined $1,000.