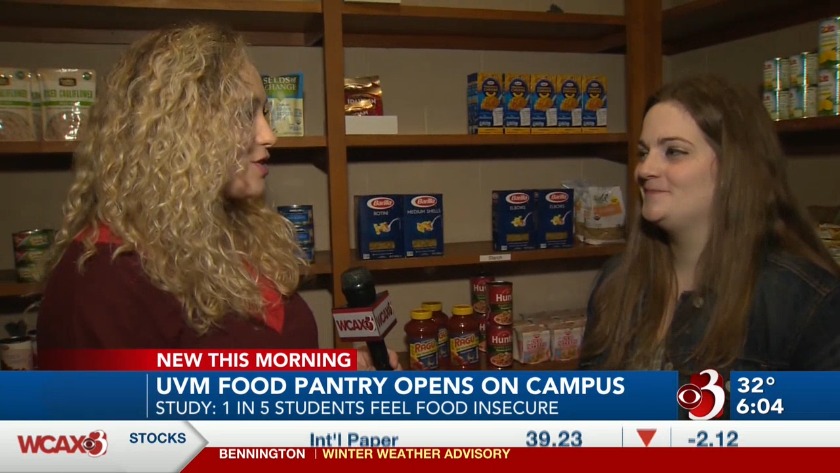 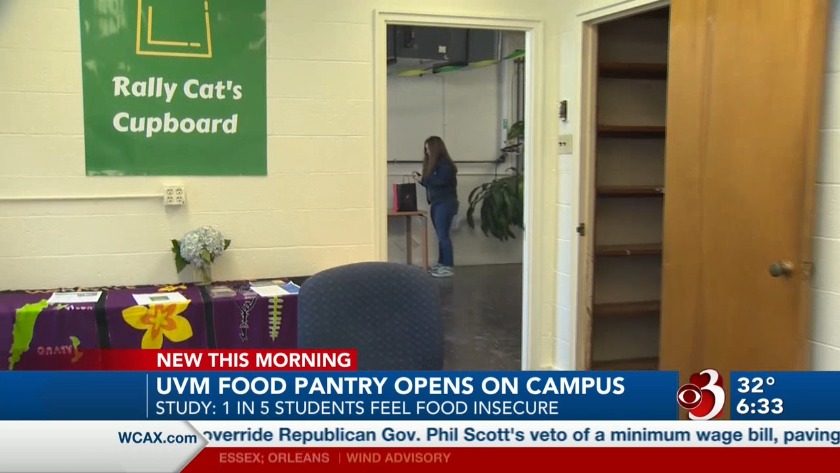 In 2017, a UVM study revealed one in five students didn't know where they'd get their next meal at one point in time while attending the school. According to the data, about 26 percent of undergraduate students-- and nearly 20 percent of the entire UVM community-- were food insecure that spring. That's compared to the 2016 national rate of 12 percent and Vermont's 10 percent.

"That really shocked a lot of people. I have to say for students, I don't think it was that shocking. I think it's something we knew was going on," said Scannell.

The finding sparked an initiative to come up with a solution. One of those ideas was putting a food pantry right on campus.

"We worked with folks across campus in order to find this space, and you'll see the shelves, we didn't have to build any shelving. It was sort of made for us," said Scannell. "We really wanted a space so someone could swing by on their way back to their dorm or between classes."

But will the additional cupboard drain already dwindling donations in the Burlington area?

"We're not concerned about that. We're excited that students will have access to food right there at UVM. We understand that a lot of folks maybe don't feel comfortable coming here, or it's more of a matter of convenience, so if that works best, we're happy to support that program," said Anna McMahon with Feeding Chittenden.

In fact, Feeding Chittenden leaders say they're interested in partnering with the Rally Cat's Cupboard to ensure it's stocked at all times.

"Kind of the key is to work together on that as opposed to looking at it as competing for those same resources," said McMahon.

That means helping UVM get the resources students need to build balanced meals.

The Rally Cat's Cupboard will join Feeding Chittenden as a Vermont Food Bank Network chapter, so they can buy food in bulk for cheap, including fresh produce, dairy and vegetables.

"It's really important to make sure people are able to have access to a variety of foods and not just live on simple carbohydrates that are, you know, a dollar for a pound of pasta," said Nicole Reilly, UVM's dietitian.

"What we've been saying all along is that we want our students to succeed, and they can't do that if they feel hungry," said Scannell.

Students are granted access to the pantry just by showing their student ID. The volunteers only ask whether the student is a graduate or under-graduate, making it a no-questions-asked policy.

"There's a couple different reasons for that. The first is just to make sure that all folks feel comfortable coming. There can sometimes be a stigma around having to use a food pantry, so if folks feel like their information is going to be used, they might be less likely to come," said Scannell.

The Rally Cat's Cupboard is serving students right now, and once a $1,000 Stop Hunger grant from Sodexo that funded what's inside it right now is spent, organizers say they will rely on the community to bring in donations through food drives and drop-offs.

What does the Coronavirus Relief Package mean for your family?
Related Links