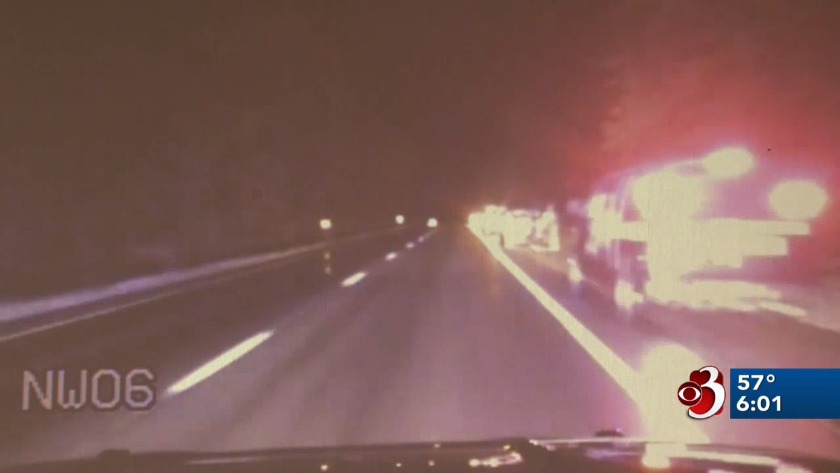 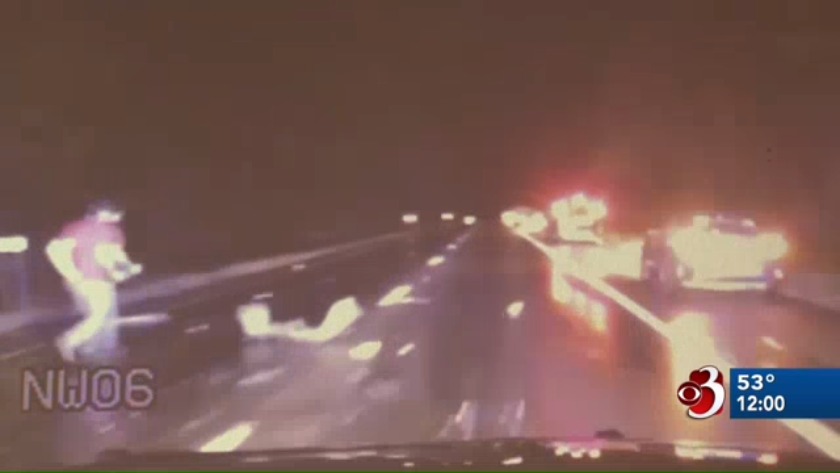 BURLINGTON, Vt. (WCAX) Jurors on day two of the Steven Bourgoin murder trial were shown harrowing video of the police response to the 2016 wrong-way crash on Interstate 89 that left five teenagers dead.

In court Tuesday, the jury saw dash cam video of the path police say Bourgoin took to leave the fiery crash scene he caused, and then return to speed through it again in a stolen police cruiser.

"Who has my car?" radioed Williston Police Officer Eric Shepard. "Somebody stole my EQ!"

Disbelief turned to panic as Shepard realized his cruiser had been stolen. His frantic message radioed to other police as Bourgoin sped south from the scene of the deadly crash in the stolen cruiser.

On the stand, officers described the confusion after the cruiser was stolen and the high rate of speed they say Bourgoin was going as he flew back up the wrong-way on I-89.

Vermont State Police Tpr. Matthew Nadeau, who worked for Richmond Police at the time, described his concern for Ofc. Shepard, and for his own vehicle.

Tpr. Matthew Nadeau: My initial response was to jump out and to go check on Eric, just because based on the way his radio traffic was -- Eric is a pretty measured guy, and when you hear him elevated like that, it got me pretty concerned that he was in danger. When I first got out, I started to run toward where I thought he was going to be, but I paused briefly and went back to my car to lock it.
Chittenden County Deputy State's Attorney Susan Hardin: And why did you do that?
Tpr. Matthew Nadeau: Because someone had just stolen a police cruiser and I didn't know where that person was.

The cruiser's dash cam -- still on -- shows the moment Bourgoin spotted a Richmond officer waiting for him at the bottom of the hill.

"You can see him pull over, turn around, and just guns it," Williston Police Sgt. Claffy testified.

"Get off the side of the road now!" said an officer, urging drivers off the road as Bourgoin sped by in the stolen cruiser topping 100 mph. The second crash was called in just moments later.

Bob Katims: He was screaming like he was frightened?
Trooper Bradley Miller: I don't know what it meant.

Prosecutors say the video also shows Bourgoin trying to escape after police removed his handcuffs so that a doctor could examine him. Katims questioned whether that was intentional or whether Bourgoin rolled down the hill unintentionally.

"I believe it was a conscious decision to move and roll," Tpr. Miller said.

The jury's perception of how Bourgoin behaved in the moments after the crash could be key to the verdict. The jury isn't tasked with figuring out whether the crash happened -- Bourgoin's lawyers aren't disputing that. The jury is supposed to deliver a verdict on whether Bourgoin was insane at the time of the crash, so how they view things like the driving, yelling, or what he did during his arrest could influence their decision about his sanity.

Wednesday the jury is expected to hear from more prosecution witnesses, and later in the week, from the state police crash reconstruction team.