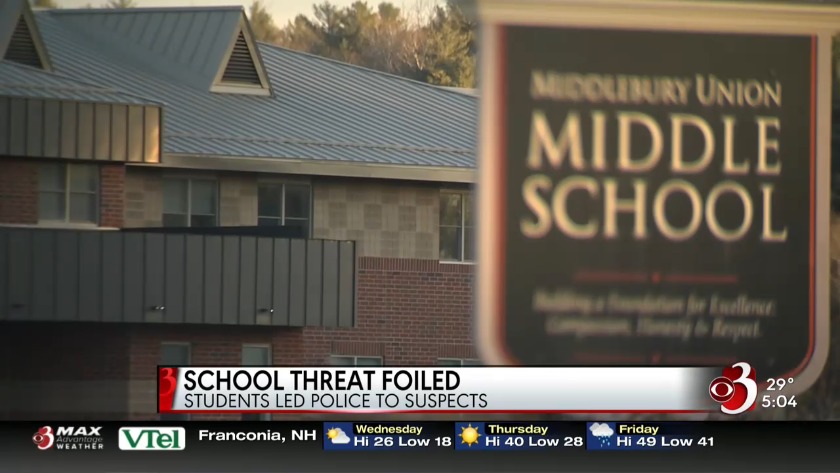 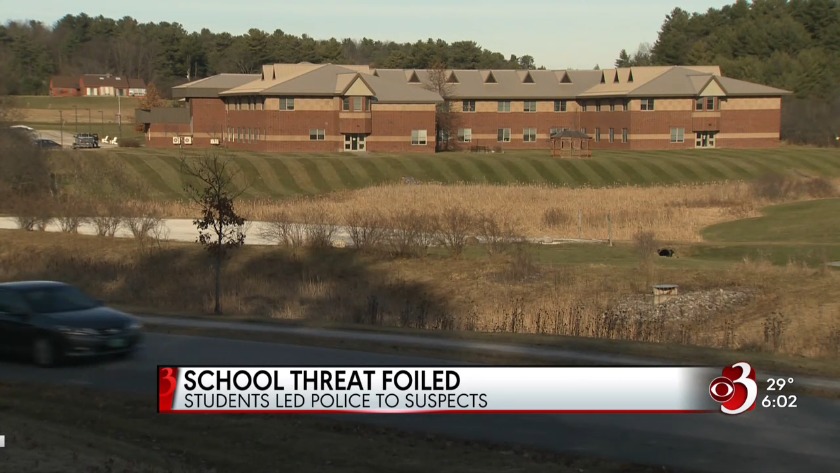 They say the teens played a part in shutting down the threat by speaking up. It's this type of initiative and reporting that police and the school superintendent says they want to see more of in the community.

"Students talking to each other and reaching out to us and then allowing us to work with police and take care of it is huge," Burrows said.

Police were able to start their investigation Saturday when one student told a parent about the rumors. Another student later provided police with specific information leading to the suspects.

"We definitely need brave, strong individuals to come forward and talk to us and let us know what's going on," Middlebury Police Det. Kristine Bowdish said.

"The fact that they have recognized that this is an issue is great," said Gail Isenberg, a community member.

Some people shopping in Middlebury said the heroic action of the students is a testament to a federal campaign.

"I think the publicity around 'see something, say something' is probably paying off and I think the students in Florida have set a good example for people to be more aware that they have responsibility for their own protection," community member Richard Isenberg said.

Police encourage everyone to stay vigilant, even if you just overhear bits of information or jokes.

"Thirty or 40 years ago, probably not a big deal or these conversations weren't happening anyway," Middlebury Police Chief Tom Hanley said. "Today, with the things that have happened, we take it all serious. You know, it's not a knee-slapper anymore."

We will probably never know the full story about the students who police say plotted the shooting or what justice or rehabilitation they may face. Because the suspects are minors, police are not releasing their names.

Police interviewed 10 students over the weekend hoping to stop the plot after a tip Saturday from a student.

"Information was vague and a lot of it, some of it was sort of joking. It wasn't anything actionable," Hanley said.

The breakthrough came when another student came forward Monday with specific details like the name of the target and that the shooting was planned for Tuesday at noon. Police were able to question the student who was allegedly behind the threat. That student was later put into DCF custody and given psychiatric counseling. Another student who allegedly offered to supply the guns was also not in school Wednesday.

"The case we're talking about today involves juveniles, so there's a lot of things we can't talk about," Hanley said.

Any charges in this case would likely be heard in family court where all proceedings are confidential.

So what happens when these suspects remain anonymous and return to school, either in Middlebury or somewhere else?

"In general, a student's files follow them if there are disciplinary measures. So that's common across any school district in the country," Burrows said.

"To be labeled and have that reputation at a young age... hopefully, they'll get great help," said Bobbi Loney, a community member.

"Juvenile laws are intended to protect students who may do impulsive things as minors and not to prejudice them as adults," Richard Isenberg said.

Police say they're keeping an eye on the situation and hope these kids take the opportunity to turn over a new leaf.