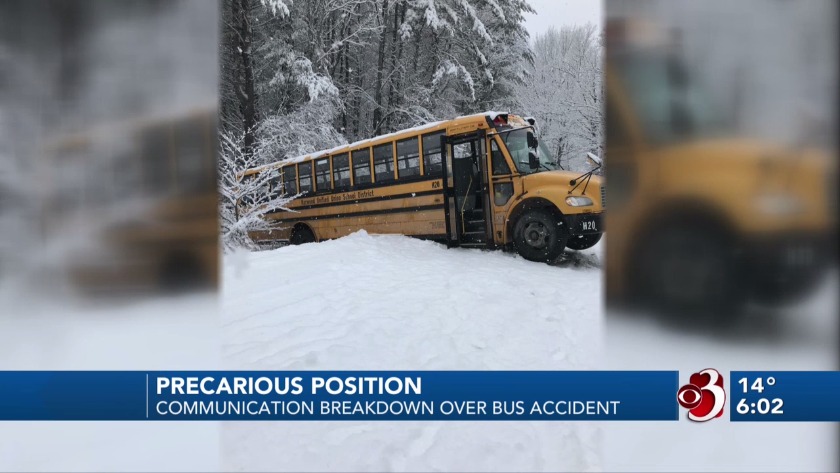 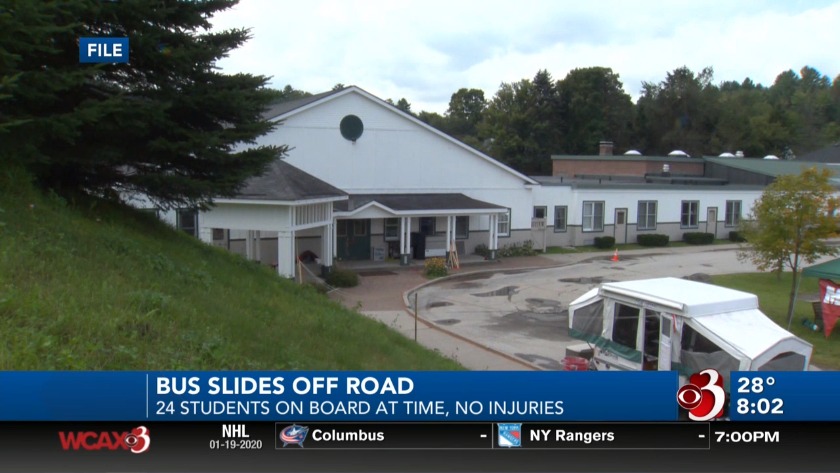 MORETOWN, Vt. (WCAX) A crash that left the back end of a school bus hanging over an embankment has the Central Vermont community buzzing. That's partly because it took more than 24 hours for parents to find out what really happened.

It was on part of the windy and steep Moretown Common Road where that school bus filled with kids went right off the road.

"You could see his wheels going around but the bus slid backward heading toward the bank and I knew that was a disaster," said Marti Ross of Moretown.

On the snowy morning commute on Thursday, police say a school bus with 24 kids from Moretown Elementary and Harwood Union High School slid off the steep embankment. The bottom of the bus got stuck on the edge of the road, stopping it from sliding farther.

Witnesses who live on the road say it could have been much worse.

Reporter Ike Bendavid: When you see them hit the bank, what's going through your mind?
Marti Ross: That they were going to go over-- there were kids on that bus!

"When I saw where the bus had gone off? Just probably what everyone would have thought if you saw it: that could of been a lot worse; that could have been really, really bad," said Eric Howes of Moretown.

Thankfully it wasn't and no one was hurt.

But the near miss has some in this community questioning the school district because they first told parents about it seven hours later. The Harwood Unified Union School District told parents in a statement the bus company, First Student, reported a bus with a "tire in a ditch" and other delays because of slippery roads.

That night, school Superintendent Brigid Nease logged onto social media and saw pictures of the crash in her feed and learned it was much more than a tire stuck in a ditch.

The next day, the district released more details, explaining school officials were not aware of how dangerous the situation was because First Student never told them the bus was hanging over a steep ledge.

Nease included a quote from First Student in her letter home to parents. It shows the company confessing to not being forthcoming: "There was a definite breakdown in communication between the bus and dispatch which in turn caused the district to be unaware that the bus was in a precarious situation and report up until much later in the day."

Regardless of who said what when, Ross, who watched the bus slide off the road, says the driver did everything right in tricky conditions.

"That guy deserves a medal," she said. "The way he kept the kids calm, his whole demeanor. There was nothing else he could have done," she said.

There are now two investigations: Vermont State Police are analyzing the crash and the school district is examining its communication protocol with the bus company.

WCAX News reached out to First Student directly to ask them about Thursday's crash and their communications with the district. We had not yet heard back when this story was published.