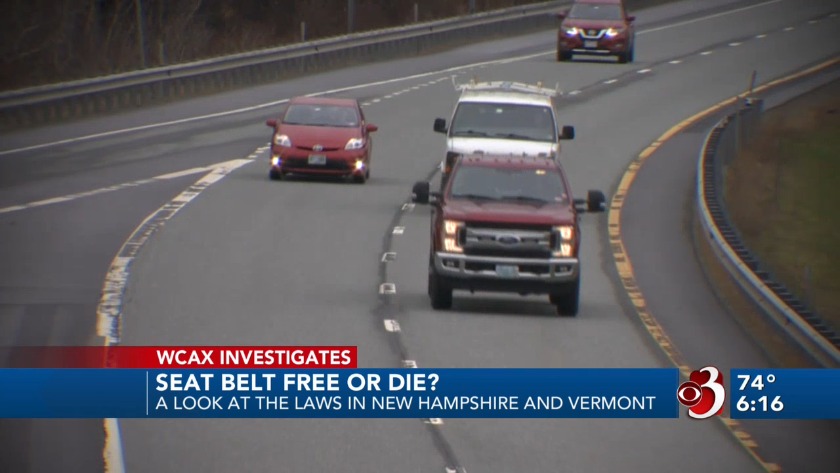 CONCORD, N.H. (WCAX) Police can ask but they cannot force you to buckle up in New Hampshire. New Hampshire is the only state without an adult seat belt law.

Vermont has one but police say it has serious limitations.

Our Celine McArthur is investigating the impact these rules have on drivers on both sides of the border. Monday, she went to Concord, New Hampshire, where safety experts from across the region met to discuss the issue. And she hit the road in New Hampshire and Vermont to investigate the deadly impact these week or non-existent laws are having on your safety.

It's posted on the sign that welcomes you to New Hampshire: Live Free or Die. It's a motto Christopher Russo embraces.

"We've lived here 20 years now and the culture of New Hampshire has kind of settled in," Russo said. "I would probably consider myself a little bit more of the live free and die kind of person."

But not a "seat belt-free or die" kind of person. Russo buckles up every time he's in the car. A practice that recently saved his life.

"This is the fastest thing that has ever happened to me in my life," Russo said. "I mean it was on the road, and then it was done."

A road he's traveled a thousand times, but on this day, a herd of deer darted into his path. He swerved, lost control and slammed into a tree at 40 mph.

"Hitting a tree at 40 mph is the equivalent of hitting a car at 80 mph because the tree doesn't give," Russo said. "When the air bag fired, this hand hit the glass and it shattered three bones here... I ended up with 15 screws and two plates in that hand... [My right arm] flew into the air, and basically reset my wrist at about 40 degrees, so they had to go in and they cut me there, there, reset everything."

As Russo looks back at the crash, he says it's clear why he's alive.

"This is a classic case. If I hadn't been wearing a seat belt, I would have went right through the windshield and probably right into the tree," Russo said.

"That safety belt is that piece that keeps you from being ejected up and over the air bag as the air bag deploys," Capt. William Haynes said.

Haynes is the commander of the New Hampshire Office of Highway Safety. His job?

In 2018, 69 percent of people killed in cars or trucks in New Hampshire were not wearing seat belts.

"And may have possibly lived if they had a seat belt on," Haynes said.

Despite public outreach efforts, Haynes is frustrated the statistics have remained fairly steady over the past five years.

That's partly because New Hampshire is the only state in the U.S. without an adult seat belt law.

"We're hamstrung in the sense that there's no law for us to take any type of enforcement action prior to those crashes taking place," New Hampshire State Police Sgt. Vince Grieco said.

Grieco says when there are consequences, drivers are more likely to follow the law. Driving while drunk, texting at the wheel or speeding-- those are things they can enforce. And drivers know it.

"It's not about tickets, it's not about warnings, it's about having something on the books that's black and white legal for us to be able to legally stop someone and let them know this is what you need to be doing, this is what you should be doing for your safety, and so your family doesn't get that knock on the door," Grieco said.

A knock, Sgt. Greg Dube has made before. He's the supervisor of the State Police Collision Analysis and Reconstruction Unit, also known as the CAR team. They handle the most severe cases.

"I think the easiest way to describe it, I think, we're essentially just like the Major Crime Unit only we're dealing with motor vehicles on the roadway," Dube explained.

Reporter Celine McArthur: Based on your experience, how often does the seat belt play a factor in whether people live or die?
Sgt. Greg Dube: I think it plays a factor almost every single time. I can probably count on one hand the cases that I have handled in my seven years on the unit that someone wore their seat belt and it was still a fatality.

When you cross into Vermont, seat belts must be buckled. The state has a secondary law, meaning police can only ticket you if you're pulled over for another reason.

"I like to look at Vermont State Police, we're the highway guardians. However, it takes everybody's effort to get to the goal we have and that is no crashes and no fatalities," Vt. State Police Lt. Tara Thomas said.

Thomas is confident one of the ways to lower this rate is: " … doing things such as wearing your seat belt."

But when asked about the seat belt law, she hesitates.

"I am trying to, I am trying not to sit here today and advocate for, like, be like, PRIMARY SEAT BELTS!" Thomas said. "Yes, I am... confident that the Vermont State Police... I feel like I am getting into where I might be getting a phone call later."

Back in New Hampshire, crash survivor Christopher Russo says the answer is clear.

"Let's put it in place and give law enforcement the tools they need to be able to enforce them," Russo said. "Seat belts and airbags work, they don't do it for free, but they do work."