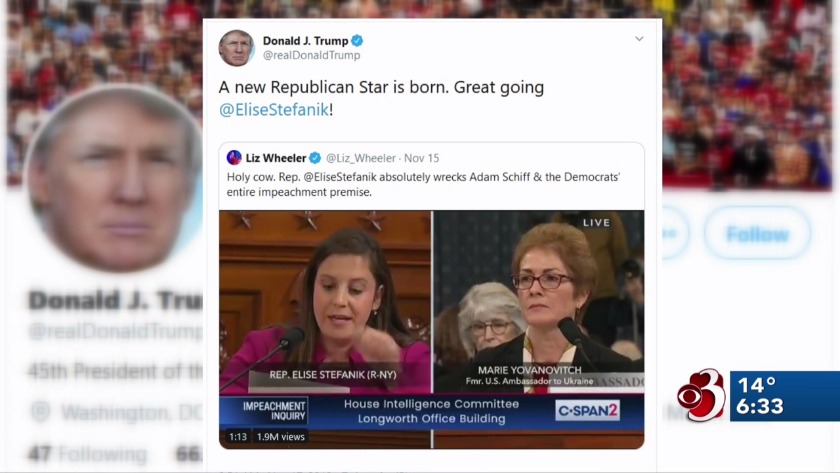 The president has called the congresswoman a rising star for her work in the impeachment hearings.

Stefanik spoke on Tuesday about the things Trump is doing that benefit her district in the North Country, citing the recent USMCA trade deal as a deal very beneficial to Northern New York businesses. She also talked about the president standing up for farmers and agriculture-- one of the largest industries in her district-- and his stance on manufacturing, where a lot of jobs are seen in the region.

"I am proud to have been named one of the chairs of President Trump's reelection campaign in New York. He continues to be very popular in upstate New York and is focused on delivering results," said Stefanik, R-New York.

While on the campaign, Stefanik will work to advance President Trump's agenda up and down the ballot in New York.

On the impeachment trial, Stefanik says expects it to be fair.

"I expect that Senator McConnell will ensure that we have a fair trial and as voters know I've been very critical of how it was conducted in the House," Stefanik said. "I think it's a distraction from the important work that we need to do on behalf of our communities whether it's continuing to focus on growing the economy, passing legislation to combat the opioid epidemic, so I will be paying close attention to the trial but I anticipate it will be a fair trial in the senate."

On Twitter, Stefanik also announced she was named as a member of the president's impeachment defense team.

She says she's proud to stand up for the Constitution, her constituents, and the American people's vote.

President Trump chose her as part of a team working to fight the impeachment.