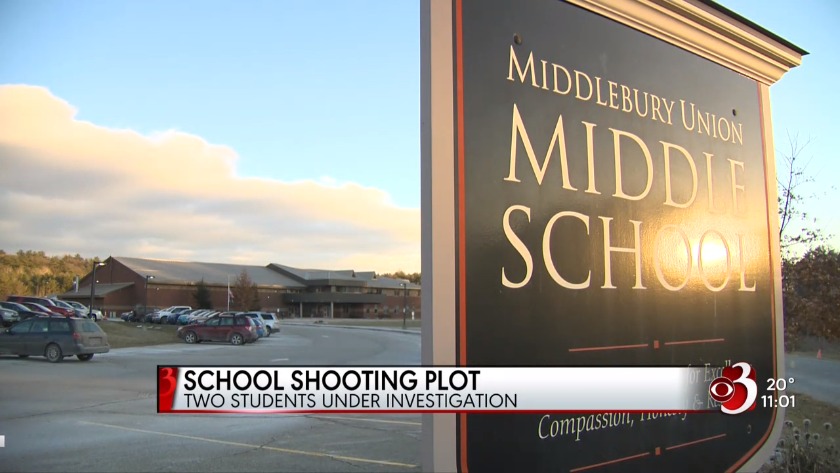 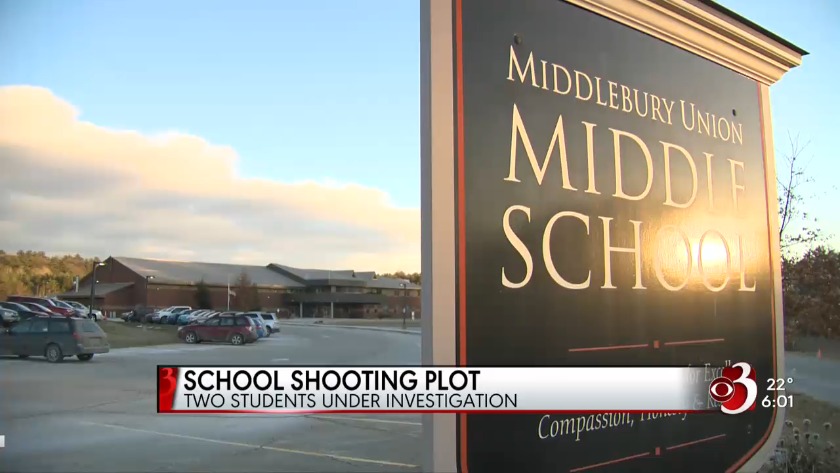 MIDDLEBURY, Vt. (WCAX) Police say they foiled a school shooting plot in Middlebury thanks to a student who came forward.

Investigators say two students at Middlebury Union Middle School plotted together to shoot another student on campus and "anyone else."

The school principal called police Saturday after a third student overheard the plan and an investigation was immediately launched. They say through interviews, investigators learned the suspects planned to get guns and bring them to school Dec. 18 at noon to shoot a student. They learned a second student volunteered to get guns from a relative.

One suspect was taken to Porter Medical Center for psychiatric counseling and treatment in the custody of DCF.

Prosecutors got an Extreme Risk Order so the guns could be seized from the other student's relative's home.

Police say there is no longer a threat to the school, however, the investigation is ongoing.

Police worked from Saturday to Monday investigating the threat. They say they were able to catch it early because of that tip from a student.

Our Neliana Ferraro spoke to one parent about it after school Tuesday. Michelle Warner said she first heard about the shooting threat at the school from her son, who is in eighth grade. Rumors had been swirling around the school about who was behind the threat.

Warner said her son was generally unfazed by the potentially close call.

"I think you just hear so much about it now that it's nothing new, even though it's never happened here, per se," Warner said.

She says in this day and age, it's worrisome to send your kids anywhere and Middlebury is a safe a place as any.

Again, police have seized the guns offered by one of the students. And the student who made the initial threat is in DCF custody.

Police say this the criminal investigation is ongoing. The police chief was supposed to go to a conference Wednesday but he's canceled that so he can address questions Wednesday morning.