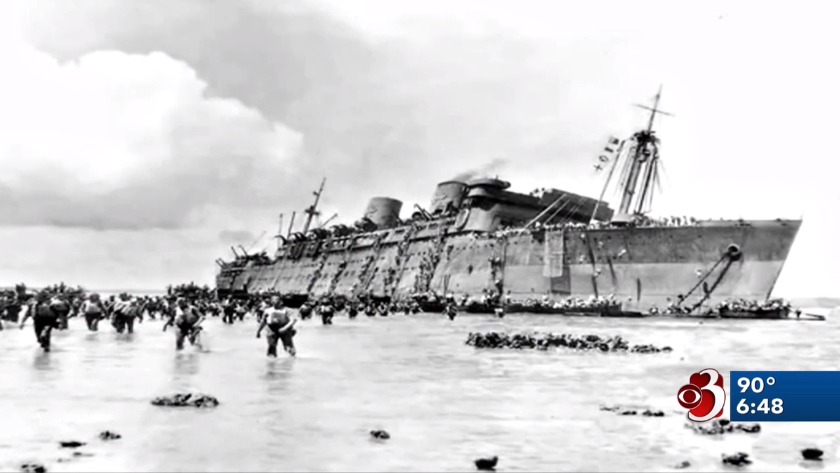 ESSEX JUNCTION, Vt. (WCAX) Two Vermont men have been brought together by what they share in a World War II tragedy. Our Joe Carroll has the unlikely story of a Channel 3 Super Senior who has provided new insights into a 77-year-old war story.

Paul Vallee has traveled from his home in Bethel to meet an Essex Junction man who could unlock some mysteries. He's with Bill Busier, a Channel 3 Super Senior profiled back in May.

"So your uncle was on the Coolidge?" Busier asks Vallee.

The SS President Coolidge was a troop transport ship in World War II. In October of 1942, the ship slowly came into the harbor at Espirtu Santo, a Pacific island 1,500 miles off the coast of Australia. The island had become a large military base to fight the Japanese. On board was both Busier and Vallee's uncle, Elwood Joseph Euart, an Army Captain from Rhode Island.

The ship hit a U.S. mine placed in the harbor to keep the Japanese away. The captain steered the stricken ship towards shore. It soon began to list after hitting a reef. There were 5,340 men that made it safely to shore. Two men perished on board as the ship sank into a watery grave.

Vallee thought there was no one alive to remember the SS Coolidge's sinking. A regular watcher of Channel 3's Super Seniors, he heard Bill Busier's story. "I was kind of listening and then I heard you say he had been stationed at Espirtu Santo and my ears perked right up," Vallee recalled. "I said, 'This is crazy.'"

Not only was there a survivor, but he was just 70 miles away. Vallee had to meet the 101-year-old Busier.

Paul Vallee: So how did you get out? Did you come through the door?
Bill Busier: No, I went up the stairs to get on the deck and of course it was really leaning like that. Actually slide down the deck.

Before he left the States, Busier's mother had bought him an expensive watch. "I said to myself before going in, I said, I don't think it's waterproof, so I took it off and put it in my mouth," Busier said.

Both he and his watch made it ashore unscathed. Euart stayed on the ship to rescue men stuck below in the infirmary. "And then the ship rolled and the fellows he was with got off, but he was still tied to the railing and didn't make it," Vallee said.

But the 28-year-old died a hero, saving six men. The ship eventually sank in deeper waters and Euart went down with it.

"Well, this is the most amazing story I've ever heard," Busier said.

It would be 70 years before a group of recreational scuba divers stumbled onto Euart's remains in 200-feet of water. Vallee took a DNA test and the results were positive. It was his uncle. "They flew all the remains back -- full military honors -- back to Providence," Vallee said.

Busier knew that day in 1942 that two men has perished, but he had no idea of the bravery of Vallee's uncle. Now, a proud nephew and a survivor remember a hero who died saving others a half a world away.

Bill Busier: He's right here where he belongs.
Paul Vallee: Right. And he's back at home where he needs to be.