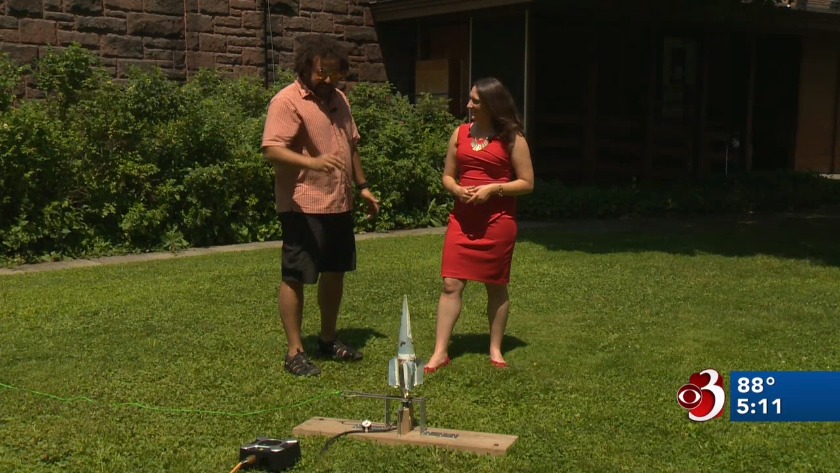 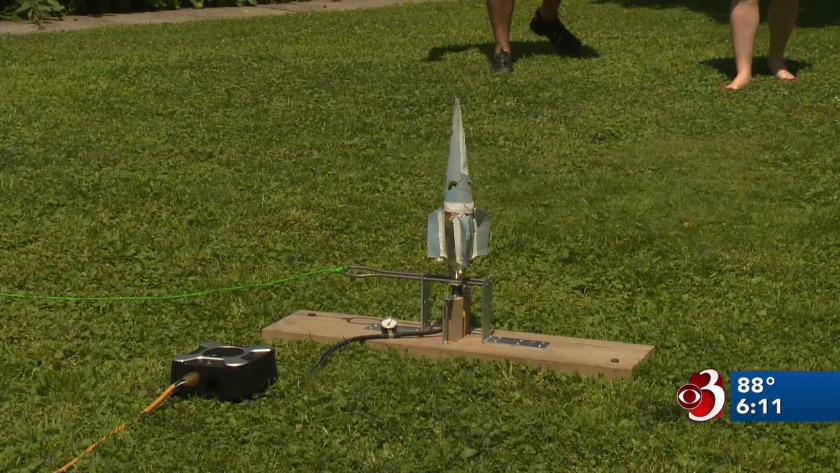 Get a close-up look at moon rocks!

ST. JOHNSBURY, Vt. (WCAX) July 20 is the 50th anniversary of the first man on the moon. To mark the anniversary, the Fairbanks Museum and Planetarium in St. Johnsbury is holding a free festival of fun for families!

From 1-7 p.m., kids and parents can pretend to be an astronaut, check out the planetarium's special screenings and even make their own "moon footprints."

They can also look for the "moon" in St. Johnsbury through a telescope!

"It won't be rising until close to midnight on the day of the event, so we're going to set up a moon at the dentist's office down the street. He was kind enough to let us use his window and I have a poster of the moon and this telescope aimed right at it," explained Bobby Farlice-Rubio of the Fairbanks Museum & Planetarium.

Participants will be able to take a closer look at some moon rocks that NASA let the Fairbanks borrow to display just for this holiday.

Reporter Cat Viglienzoni: We're here at the Fairbanks Museum and Planetarium with Bobby Farlice-Rubio and you have something really special here.
Bobby Farlice-Rubio: Oh, yes. This is long-awaited, very anticipated rocks from the moon that NASA has sent here.
Cat Viglienzoni: So cool!
Bobby Farlice-Rubio: So, here they come, and they're encased in a way that we will never be able to get out of here, but there are six pieces of the moon here and they're very different materials that you can see from your backyard when you look at the moon. The brightest part of the moon is anorthosite, which is kind of like a quartz. It's the same kind of rock. And the dark parts of the moon like the Sea of Tranquility where the astronauts landed is basalt, which is a black rock that comes from volcanos just like if you were in Hawaii with all those black sand beaches. So the moon is basically made of the same ingredients as the Earth, but it doesn't have the weather and the winds, so the rocks there undergo different processes. But the moon is constantly bombarded with meteors, so there's a lot of breccia all over the moon, which is a conglomeration of the different minerals glued together by all the heat and force of that collision. So kind of like shrapnel and debris from all those things landing on the moon. And then, of course, there's powder on the moon. Regolith is what they call it technically. And we have some from the Mare areas, like the Sea of Tranquility, some from the Highlands area, like where Apollo 14 landed, in the Fra Mauro Highlands. And then orange soil, which was found by the last time humans went to the moon, on Apollo 17. The orange soil is actually volcanic glass from a time when the moon had volcanoes and it made something like obsidian like we find on Earth. But it's tinted orange.
Cat Viglienzoni: OK, so these are some examples from Earth then.
Bobby Farlice-Rubio: That's right. We have basalt, a typical volcanic type rock that people have in their backyard, especially if you live in areas with recently active volcanoes, like California or Hawaii. And then here's some breccia from Earth, impactite is one of its names, when something hits the ground so hard that it melts it all together.
Cat Viglienzoni: It's a good name.
Bobby Farlice-Rubio: Yeah, it's a very useful name. And here's a simulation-- it's not from the moon, but it's simulation of regolith. This powdered rock. One of the fascinating things about that is that it was unexpected. When Apollo 11 landed they thought they were going to hit solid rock. But instead, they sunk about two inches. And they were like, 'Wait -- what is this substance we're landing on?' And they were worried it might endanger their ability to launch back up because if it was something like quicksand, they would sink into it and it would swallow your spacecraft. But of course it's not that, it's just the powdered remnants of all the meteorites and the surface of the moon that gets constantly bombarded. So it gets constantly covered with a talcum powder-like fine layer of regolith everywhere, and that's what we have some examples of here.
Cat Viglienzoni: And so people will be able to tomorrow see these, correct?
Bobby Farlice-Rubio: Yeah, they will get to see them up close, and I will hopefully be able to explain all these things to them and answer their questions and that will be the centerpiece, but not the only thing to do in this big day of activities.
Cat Viglienzoni: And you can actually point out some of those spots on the moon there?
Bobby Farlice-Rubio: Absolutely.
Cat Viglienzoni: Here, I'll hold those while you do that-- anything to hold the moon rocks!
Bobby Farlice-Rubio: The place where the Apollo 11 astronauts landed was here where it says Mare Tranquilitatis-- that's the correct way to say Sea of Tranquility in Latin. And the name "sea" actually comes from the time when they actually thought these dark spots were oceans. And they didn't know why they were darker than the rest of the moon, but now we know it's because of basalt rock filling in these craters. Which means these craters were caused by impacts so big that when the rock crashed into the moon, the impact filled the crater with lava. So the lava from the center filled these areas, and that's why we have these basaltic areas on the surface of the moon. And then all the white stuff, the bright stuff, is all the anorthosite which is the majority of the surface of the moon.
Cat Viglienzoni: Pretty cool! All right, Bobby, thank you!
Bobby Farlice-Rubio: Thank you, Cat!

Participants can also make and launch their own bottle rockets!

Cat Viglienzoni: OK, Bobby, what do we have here?
Bobby Farlice-Rubio: What used to be a 20-ounce soda bottle has now been repurposed into a rocket that a kid can make within a few minutes with the materials that we will have for them at the museum. And then they can see it launch into the sky and get into the spirit of rocketry out there.
Cat Viglienzoni: OK, so you mentioned the soda bottle. What else is in here?
Bobby Farlice-Rubio: Well, just some construction paper, some duct tape or packing tape, some decorations-- kids can use markers or stickers and decorate however they like. But then you just fill the bottle up halfway with water and we use this compressor here to get the pressure up to 100 psi, and then we'll do a little countdown like NASA does when launching, and then we'll pull the rope and pull the pin and then the rocket is released. And they usually go up about 100 or more feet up in the air, sometimes they get lost on roofs.
Cat Viglienzoni: And so you mentioned this is obviously a much smaller scale than a rocket-- what kind of comparison are we talking about here?
Bobby Farlice-Rubio: Well, it's a good comparison. This will be around 100 pounds of force when it leaves. The Saturn V rocket when it took astronauts to the moon was 7 million pounds per second of force. So just imagine the factor. This one with a hundred pounds will get you a couple hundred feet. The one that goes 7 million pounds per second will get you 238,000 miles away to the moon.
Cat Viglienzoni: All right, let's see it go.
Bobby Farlice-Rubio: All right, I'm going to bring out Isaac and Ahmed. They're going to run the equipment here. Who's going to be the pump operator? All right, Ahmed you're on the switch. And Isaac, you're on the launch actuator rope there. And go ahead and start up the pump. We'll do a countdown... All right, you might want to take a step back. It's going to go in five, four, three, two, one-- all right pull it! (ROCKET BLASTS OFF)
Cat Viglienzoni: Woo!
Bobby Farlice-Rubio: Right into the sun and back down... See, that's all there is to it!

The Astronomy Extravaganza is Saturday, July 20 from 1-7. And it's free to get in during that time. Click here for all the details.