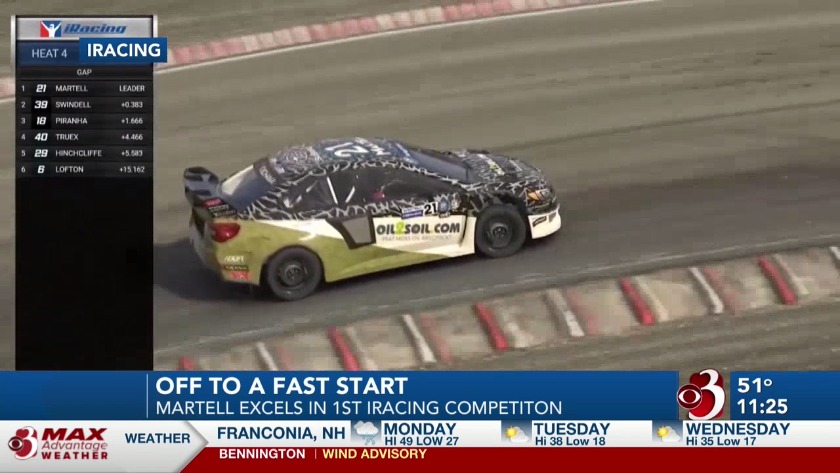 Martell Off to a Great Start in iRX All-Star Invitational 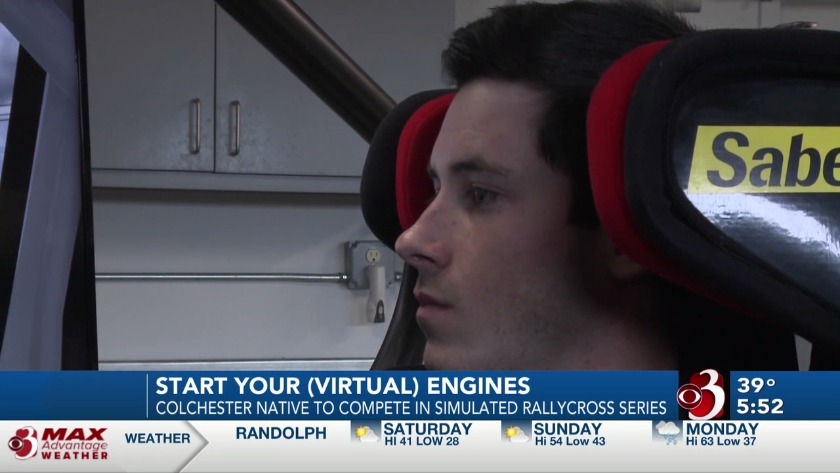 COLCHESTER, Vt. (WCAX) People around the country are working from home to maintain their social distance...but for some of us, that's a lot more fun than it is for others.

Meet Conner Martell. The Colchester native and member of the Dreyer and Reinbold team is a rising star in the sport of rallycross, a closed-track race with the surface made up of a mix of asphalt, gravel, dirt and mud sections.

"It's very realistic, it has 4 degrees of movement. It has a real peddlebox out of a racecar, it has a real force feedback steering wheel," Martell said.

It's called iRacing. A hyper-realistic simulation complete with accurate function of real cars and mapping of real world courses.

"You can change everything like you could in a real car...so I'm gonna pick the Hell, Norway setup," Martell said from behind the wheel of his Simcraft motion simulator, which he runs through the online iRacing platform.

"You can basically choose which track you're going to race at and practice at that track every single day for as long as you want. And it doesn't cost half a million dollars to run the racecar."

It has provided an outlet for drivers to keep their skills sharp and compete against each other virtually...which is exactly what Conner is doing in the iRX All-Star Invitational . The six-race virtual series will allow this Vermonter to test his skills against some of the biggest names in motorsports, from Rallycross stars like Travis Pastrana to Indy 500 winner Alexander Rossi...and the stakes are pretty high .

"Everyone that'll do it has a chance to win $10K, and that'll go towards charity. And if you do well in it, they'll invite you to do the actual esports iRacing championship," Martell said.

The series will be broadcast through iRacing's social media channels continuing a trend Martell says has brought a ton of new interest to the sport .

"People that wouldn't normally sponsor motorsports are now coming into this esports stuff and saying, 'Ok, look, there's some money here and there's a lot of people watching it.'"

The series got underway Friday, April 10th at Hell Lankebanen in Norway and runs every Friday through May 15th. Martell won his heat race and finished third in the feature. The series continues Friday, April 17th at Daytona.