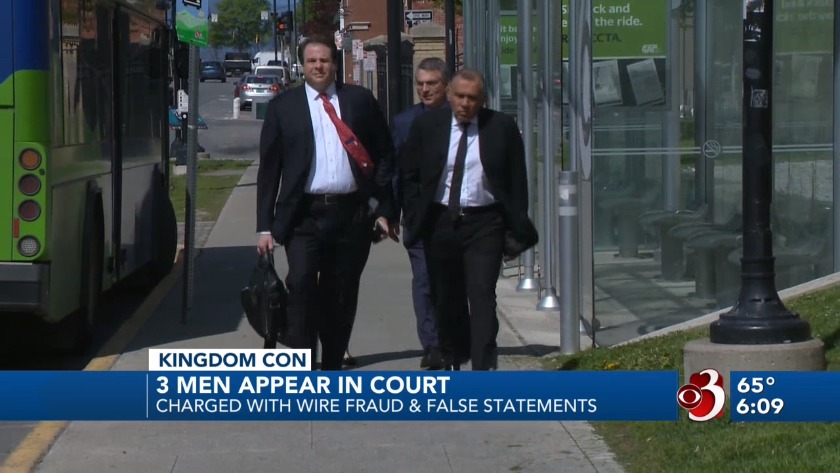 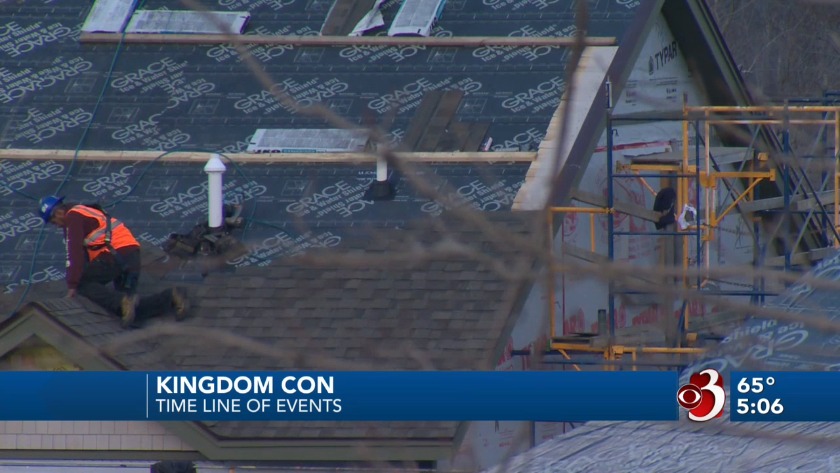 Timeline of the Kingdom Con 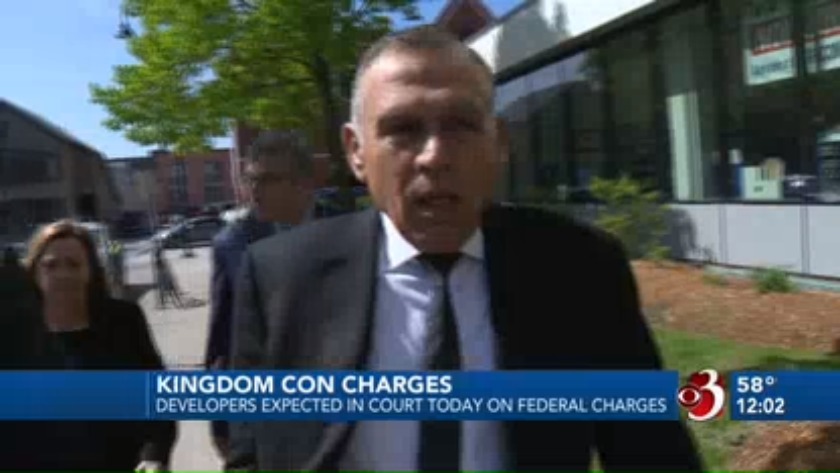 BURLINGTON, Vt. (WCAX) The other shoe drops in the Kingdom Con. Four men face federal charges in the largest fraud in Vermont history, targeting foreign investors with the promise of developing sites in Jay, Burke and Newport.

WCAX News is covering all angles of this story for you. We hear from federal prosecutors about the case they've built and the defendants as they leave the court. We look at the Kingdom Con by the numbers-- all the money spent and where prosecutors say it went. And we've got reaction from the Northeast Kingdom.

Our Darren Perron broke the news on Tuesday that charges were coming. He was in Newport Wednesday at what is probably the most visible scar from the EB-5 fraud case that centered on Jay Peak developers. A hole in the heart of downtown Newport that was supposed to have been redeveloped as part of the big plan. But federal investigators say it was all a scheme.

But the U.S. Attorney for Vermont Christina Nolan says it was all bogus and a plot to line the developers' pockets.

"Vermonters are trusting people. They were understandably enthusiastic about the defendants' promised job creation in this part of the state, but the defendants engaged in deception and promises broken. It is wrong and we hope the announcement of today's grand jury indictment is a step in righting that wrong," Nolan said.

Three of the four men named in the Kingdom Con indictment appeared in federal court.

All three pleaded not guilty to the charges that include conspiracy to commit wire fraud, wire fraud and making false statements.

Attorneys for Ariel Quiros and Bill Stenger spoke with the media on their way out of court.

McArthur spoke on behalf of Bill Stenger outside the federal courthouse in Burlington Wednesday morning.

"There is in the strongest possible way we can say it, a denial that he engaged in any criminal activity at all," McArthur said.

McArthur claims his client had no motive to engage in this scheme.

Stenger, 70, who walked into the courtroom in handcuffs, faces 10 charges, including wire fraud and making false statements.

According to court paperwork, Stenger was in charge of recruiting investors and using his connections in Vermont to garner support from local, state and federal politicians.

"He wanted to bring jobs, he wanted to bring economic vitality. And there is simply zero evidence that he benefited in any way from engaging in the allegations the U.S. government has put forth," McArthur said.

Court documents allege that Stenger was in on the planning of the fraud and was to receive $1 million as part of the scheme.

Ariel Quiros, 63, of Miami, also was in handcuffs walking into the courtroom. He is painted as the decision-maker of the Kingdom Con.

Quiros faces all of the same charges, including two additional money laundering charges.

"We're not going to make much of a comment on this case," said Seth Levine, Quiros' attorney. "We're just going to say that it should never have been brought. And the fact is that the story, the full story has not been told by the government. We look forward to the truth coming out and we look forward to Mr. Quiros' vindication."

Prosecutors say the scheme involved the embezzlement of the EB-5 funds instead of building the Biomedical Research Park. The feds say some of that money was funneled into the pockets of Quiros for his own use and to another man, South Korea-based businessman Alex Choi.

A business partner of Quiros, William Kelly, also pleaded not guilty to the charges in court on Wednesday. According to court paperwork, Kelly took the lead in creating the fraudulent business plan.

Alex Choi of South Korea was not in federal court Wednesday and according to prosecutors is at large.

Quiros, Stenger and Kelly will eventually have their case heard by a judge in Rutland.

The defendants face a maximum penalty on the most serious charges of 20 years in prison, three years of supervised release, a $250,000 fine or twice the gross gain or loss and restitution to the victims. The indictment also alleges forfeiture against the defendants.

THE KINGDOM CON BY THE NUMBERS

The whole Northeast Kingdom Development project and the EB-5 fraud scandal is a story about numbers. Many of them are really big numbers-- the kind we don't talk about in Vermont very often.

Let's start with the money: $450,000,000. That's how much the feds say Quiros and Stenger raised from EB-5 investors for the NEK projects.

The SEC says $200,000,000 was the amount misspent in a Ponzi-like scheme. That's the shifting of funds for one project to cover expenses on another.

And $50,000,000-- the amount the SEC says Quiros diverted for his own personal use through a complex web of financial transactions.

All of that money was raised through the EB-visa program. Foreign investors put up $500,000 each in exchange for a green card and the hope of permanent residence in the United States.

Investigators say some 800 investors from 74 different countries bought into the NEK projects.

But because the plug was pulled when the alleged fraud was uncovered, an estimated 400 of those investors have not gotten the green cards they tried to buy.

The other big number to consider-- 10,000. That's the number of jobs the developers promised to create in the Northeast Kingdom.

TIMELINE OF THE KINGDOM CON

The Kingdom Con case is all rooted in the EB-5 visa program. It was devised by Congress as a way to funnel foreign investment to poor parts of the country, like the Northeast Kingdom.

Here's a look back at how this once-promising funding source turned into one of the biggest criminal cases in Vermont history.

When we first learned about the EB-5 program, it almost sounded too good to be true; wealthy foreigners who just wanted to get into the United States were willing to hand over a half million dollars to spur economic development in Vermont.

It all started back in 2006. Jay Peak president Bill Stenger first tapped into the EB-5 program, using foreign investments to bankroll an expansion of the resort. The program raised $250 million for a hotel, water park, ice arena and other development as Jay became a year-round resort.

By 2012, the program had been so successful, Stenger and Jay owner Ariel Quiros announced the Northeast Kingdom Development Initiative-- a half-a-billion-dollar plan for more development at Jay and Burke Mountain, plus a Korean biotech company and downtown improvements in Newport.

But in 2014, there were rumblings of problems. Investors wondered when they would get repaid and doubts were raised about government oversight of the EB-5 program.

In 2016, a bombshell from the Securities and Exchange Commission, announcing 52 civil counts of securities fraud against Quiros and Stenger. The feds accused the pair of misusing $200 million in investor funds in a Ponzi-like scheme.

In 2018, Quiros and Stenger settled their civil cases, paying fines to the federal and state governments.

And now, of course, May 2019, federal prosecutors announced criminal charges against Quiros, Stenger and two other partners in the alleged scheme, William Kelly and Alex Choi. Much of the alleged fraud centers around AnC Bio, that's the Korean biotech plant planned for Newport. It never came close to being built and according to the federal indictment, the developers knew all along that it never would be a successful project.

There's no clear agreement on exactly how many jobs were actually created in the Northeast Kingdom. Perhaps a couple of thousand, but many of them were not permanent. And that is the real disappointment of the Kingdom Con for the people who live in this economically depressed area.

In Newport, people are reminded every day of the failed promise of EB-5. AnC Bio didn't happen but an entire downtown block is gone as part of the alleged scheme.

You would think the vistas would be a big bonus for Steve Breault's Main Street café, but for several years now, his view has been a hole in the heart of Newport, the most visible scar of the EB-5 scandal.

"It's been a detriment. It's definitely hurt our sales," he said. "There was businesses and apartments there. Now, there's just weeds and trees growing 20 feet high."

An entire block was torn down to make way for promised redevelopment. But investigators say those projects were all a fraud concocted to lure more investors to cover the cost of other projects at Jay Peak and to line the pockets of the developers.

"Too good to be true," Breault said.

Residents here have been dealing with the eyesore since the scandal broke.

"It just makes me angry that because of greed, this happened," said Evelyn Barber of Newport Town.

It's unclear when and what will be done to fill the space. But the chamber of commerce promises the prime location will eventually attract investors.

"What's holding this up from development is it's in the court receiver's hands. And so it can't be sold, it can't be developed. Everybody's just waiting for something to happen," said Bruce James of the North Country Chamber of Commerce.

Breault hopes that someone cooks up a plan, and soon.

"You know, it's been a bit of a disappointment, to say the least," Breault said.